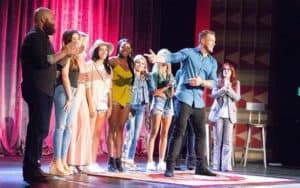 This week Colton’s virginity was a major theme again as the group date kicked off at an improv theatre to tell stories about major “firsts” in their lives. I find myself wondering if Colton is so basic AF that his virginity is the only marketable thing about him. Megan Mullally, from Will and Grace, and her husband, Will Offernman, from Parks and Recreation, hosted this group date. They have been married for 15 years and are major couple goals. They each told really funny stories filled with innuendo. The participants on this date were Demi, Bri, Tracy, Elyse, Hannah G, Nicole, Onyeka and Catherine. Colton “shockingly” told the story of the first time he told someone he was a virgin. Elyse joked about her past dating history and the first time she dated a younger guy (Colton). Demi congratulated her on admitting she is an older woman. I didn’t realize 31 and single meant you should buy a cat and start calling yourself a spinster. Hannah G went the sentimental route and tells the story of how Colton giving her a rose was the first time she truly felt special. Onyeka and Catherine’s stories revolved around the interrupting events that took place at the first cocktail party. Tracy’s story was about how she once competed for a guy with a former friend which resulted in her getting punched and both ladies sleeping with the guy. Demi, front-runner to be this season’s villain, used her speech to talk about missing her opportunity to kiss Colton on the first night so she ended her speech by walking into the audience and kissing him.

Demi was a bit to overconfident and thought her big play would lead to getting the rose on the group date. Tracy seemed to spend the evening butt-hurt she didn’t think of it herself. At the bar after the improv show, Demi pulled her signature move and pulled Colton away before he could finish his first sentence. Demi self-proclaimed herself a confidence booster and women supporter. As someone who has said that older women have no place on the Bachelor and someone who’s first kiss seemed more like she was marking her territory I was thankful I wasn’t taking a drink as she made her humorous proclamation. The women all got super offended when she jokingly grabbed the date rose. Elyse, who is part of the cougar club, got the group date rose instead.

Birthday girl, Hannah B, got the first one-on-one date. The beauty queen struggled to come up with a toast for her and Colton. Colton expected the connection to be a bit stronger between the two but found that she wasn’t really opening up. Hannah B’s way of opening up was to ask Colton why he is still a virgin, as if there were not enough soundbites on YouTube from past seasons of the Bachelorette or Bachelor in Paradise, that she could have previously found her answer. He gave her a rose. 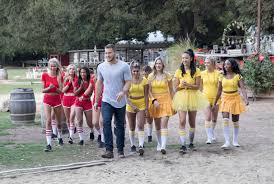 The remaining contestants went on a camping themed date. The women were separated into two teams to compete in relay games and tug-of-war. The winning team got to have a sleepover with Colton. The best part of this date was Billy Eichner, from Friends from College, who felt out of place on this show but cracked some good one-liners at Colton’s expense. Yellow team lost and had to go back to mansion early. Red team, Alex B, Caelynn, Cassie, Heather, Katie and Tayshia, won the extra time. Heather confesses to Colton she has never been kissed before. He seemed okay with it but also smiled at her the entire time. Caelynn confessed to Colton that she had been sick as a child and wasn’t expected to live. Heather received the rose on the date.

Tracy spent most of the episode hating on Demi. At the cocktail party Tracy had just got the chance to talk to Colton at the cocktail party when Demi stole him away in a robe. Demi wanted to show Colton her fantasy closet upstairs where she gave him a massage. All the women freaked out about it and Tracy went to her bedroom to cry. Demi pretended to be shocked that Tracy would be offended that her time was interrupted or the  Demi, proclaimed cougar attacks from the other women. I think if this episode has taught us anything its that Demi really wants to be on Bachelor in Paradise. Maybe a Jordan and Demi pair up?!

The Bachelor airs Monday’s on ABC.