I was provided with tickets to facilitate this giveaway.

The Carousel Theatre for Young People presents the powerful retelling of Oscar Wilde Classic, from Australia, The Young King. A young goatherd finds out that he is heir to the throne and is dazzled by the riches and finery of his new life, only to discover that everything comes at a price…The Young King , is a coming of age story that grapples with the ethics of beauty, leadership and compassion. The beautiful language of Oscar Wilde joins the intimate and magical world of internationally-acclaimed theatre company Slingsby (Adelaide, Australia), as audiences journey to faraway lands replete with rich rewards and challenging choices.

This play is recommended for ages 8 and up. There will be lighting effects, haze and smoke effects during the performance. The Young King is a Slingsby production from Adelaide, Australia. Written by Oscar Wilde and adapted for the stage by Nicki Bloom. 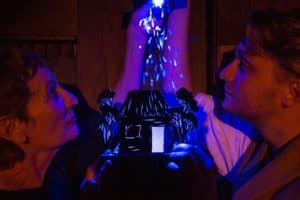 The Carousel Theatre for Young People has been dazzling audiences since 1976. CTYP’s dedication to artistic excellence has resulted in critical acclaim and twelve Jessie Awards and 60 nominations in the Theatre for Young Audiences category in the past six seasons. Most recently, CTYP’s Busytown received the Jessie Award for Outstanding Production, TYA in 2014.

Thanks to the Carousel Theatre for Young People we will be giving you and your family the chance to win 4 tickets to see the show yourself. Tickets are for the April 13th show at 3pm. Winner will be announced April 9th.