My daughter is eleven years old and is entering her final year of elementary school. We decided it was time to freshen up her bedroom. I sold some of her furniture and bought a new dresser of a bidding wars site. The fantastic thing about the dresser is that it is solid wood and will be more sturdy then some of the newer styles of furniture. She decided that she wanted to paint the new dresser white. I stripped the varnish off the dresser and we started painting together. Painting took us about a week to complete. The one really challenging thing that I encountered in this D-I-Y project was finding fixtures that fit the existing holes in the drawers. I ended up having to do individual ones to fit each hole instead of four longer ones. The tracks on two of the drawers were damaged so I replaced but the screws ended up poking into the inside of the dresser so I used a hot glue gun to coat the sharp ends inside the dresser so that they wouldn’t damage any clothes.

-Paint and paintbrushes were $60 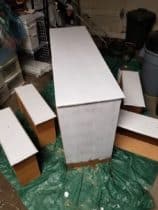 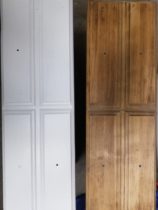 -Paint on top of a tarp in fully ventilated space

– Paint in a well lit room

She also wanted to update her headboard so she picked out a super fun baby blue colour. I decided that spray paint would give a sleeker appearance on the metal so I did her headboard myself. I took advantage of our dry weather and did the project outside. Took about 15 minutes to paint and approximately 2-3 hours between each coat to dry. It took two cans of spray paint to complete. After the blue paint I also sprayed with a clear top coat. 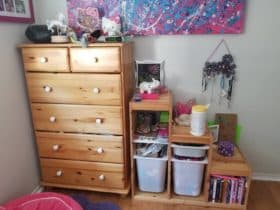 She still plays with toys so I didn’t want to push to downsize very much, but eliminating the one toy shelf from her room to make room for the new dresser, made some downsizing necessary. Ultimately half a bin of barbies were given to a local kindergarten class which let us adjust the rest of her bins to hold the remaining toys. I also found a different shaped bin to add to her closet to hold some of the bags and purses that were stored in the furniture that I sold.

Suggestions on where to donate or sell used toys: 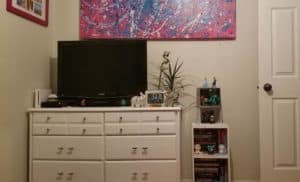