I was provided tickets to attend this productions but all opinions are my own. 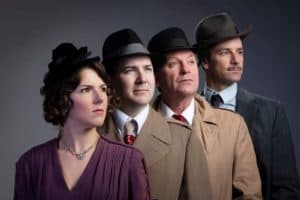 Circle Bright Productions becomes the first Canadian theatre company to offer Mandarin surtitles to hit comedy, Hitchcock-adaptation The 39 Steps. Adapted by Patrick Barlow. From the novel of John Buchan, From the movie of Alfred Hitchcock.

My daughter and I attended The 39 Steps on opening night. This show was fun and would recommend for ages 7 and up. Perfect date night comedy. Without spoiling too much, the show starts with a projection screen taking us back to a 1930’s black and white movie. You aren’t really sure whether the movie is the performance or how it will transition in to live theatre until the actors arise from the audience. The energy of the production kept us captivated the entire time. The theatre space was quite intimate and felt like you are immersed in the show.

This was far from a typical thriller, famed crowd-pleaser The 39 Steps is a theatrical tour-de-force where four gifted actors play multiple comical characters in a scene. A cheeky parody of Hitchcock’s slick and stylish mysteries, The 39 Steps swaps disguises as fast as its characters’ banter. It was highly impressive how energetic and well timed the performances were. It was like a well choreographed dance with the music.

A hilarious whodunit, Richard Hannay (Jay Hindle) meets Annabella Schmidt (Ella Simon) one night at a London theatre. After a fight breaks out and a shot is fired, the two escape to Richard’s flat. She tells him that she’s a spy hot on the heels of two assassins (David Marr and Kazz Leskard) and is seeking the truth about the “The 39 Steps”. At midnight, Richard wakes up to find Annabella murdered. Now being pursued by both the police and the assassins, Richard must prove his innocence while solving the mystery of “The 39 Steps”!

Speaking to the unique challenge of ensuring Mandarin surtitles match the fast-paced, quick-witted show, Rodgers says, “I am so thrilled to bring this delightful comedy to life with Mandarin surtitles! Our high-energy production and clown-like characters already engage audiences of all ages and languages, but having those surtitles is just icing on the cake to ensure our Chinese-speaking audiences are completely up-to-speed on the play’s fast-paced action. I can’t wait to bring this big, beautiful play to as many Vancouverites as possible!”

Engaging Chinese-speaking audiences in Canadian theatre experiences is a high priority for Circle Bright founder and producer Hanying Chen. “Due to the language barrier, there is a large number of Chinese speakers in Vancouver with limited access to great local theatre. Some of them are new to the country and are still in the process of learning English, while some of them speak some English but are intimidated to attend a full-length English language theatre production. At Circle Bright Productions, the priority is to produce live performances that are accessible to everyone, especially to the Chinese demographic.”

On her selection of The 39 Steps for the company’s first foray into full-production programming, Chen adds, “The 39 Steps is theatre at its best. It has the most intriguing and fun elements that the audience will need to have a great time in the theatre. In addition to the mystery and romance elements of the story, some of the hilarious physical comedy will be very entertaining even without the surtitles.” 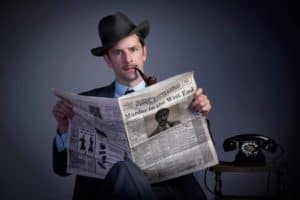 This was one of my favourite theatrical experiences that I have had.

If you attend the show let us know in the comments  (without giving it away) if you solved the mystery of “The 39 Steps” before the end of the show.