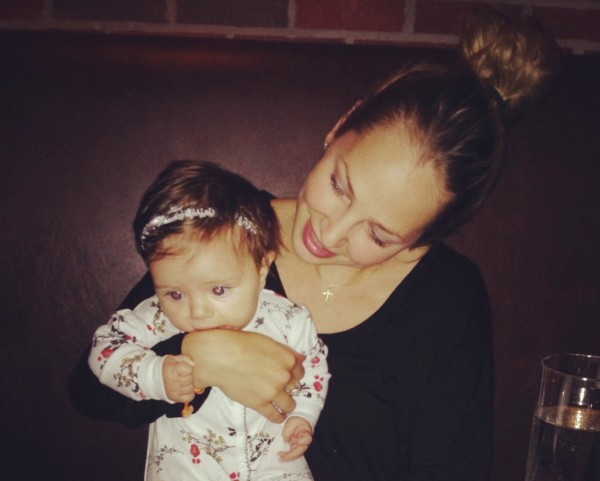 The day Colette turned 6 weeks old, I turned to my husband and said “It’s so crazy how much she’s grown in such a short amount of time”, to which he responded “You want to know what is really crazy, if you still taught in the Bronx your maternity leave would be finished.” He was right, I had been so busy getting used to being a mom to our baby girl that work was nothing more than a distant memory.

Although I left my family and a very comfortable teaching career back in the United States, I could not imagine going back to work at this point. Don’t get me wrong, my career is very important to me but Colette didn’t even crack her first real smile until seven and a half weeks. I’m sure most mothers like me are still physically recovering from birth at six weeks, especially if they’ve had C-sections. The Canadian government mandates a paid leave. Mothers can take between 17 and 52 weeks of leave from their jobs, all depending on the amount of hours and years they had worked prior to paying into EI. Once their maternity leave is up their employers are required to accept the employees back into their jobs at the same rate of pay with the same benefits.

Maternity Leave in the US is a Different Story

Maternity leave in the United States is whole different story. The Family and Medical Leave Act (FMLA) is a law that requires most companies to allow their employees up to 12 weeks of unpaid family leave time after the birth of their child. Yes a whole 12 weeks of UNPAID leave. A lot of companies have their own maternity leave. I remember one of my fellow coworkers using her vacation and sick time to extend her maternity leave because she was having a hard time finding childcare.

I recently chatted with a girlfriend living in NY who had her baby only a couple of weeks before I had mine. She gave me great insight as to what a mom deals with when returning to work only 12 weeks after having her first baby. First she had to deal with separation anxiety. The constant thoughts of how her little bundle of joy was doing and how she could manage 8 whole hours without holding her. As well as the guilt of having another person soothing her child. Then there were the demands of pumping. With the current research of the benefits of breastfeeding she wanted to continue giving her daughter breastmilk even when she wasn’t there. So on her lunch break she would sit either in a locked closet or bathroom stall with a sandwich in one hand and the breast pump in the other. Not only was she trying to keep a brave face while at work she was also trying to prove she is still a career driven woman.

Being home for this entire year allows me to breastfeed for the first year of her life (if I choose to), to be the person who soothes her cries and watch her develop emotionally, cognitively, and socially. Most importantly it allows me to transition into a full time mommy. That being said I feel very fortunate to be living in Canada where I plan on spending the entire year enjoying everyday of motherhood.

Emily is a first time mom, an American living in Canada, blogger, dog lover, Martha Stewart wannabe, education enthusiast, and most recently a master of doing everything one handed. Emily enjoys sharing the joys, struggles, and humor in becoming a mom to other Modern Mamas everywhere. Before dedicating her life to her family and writing about the undertakings of motherhood she earned a B.A. and M.A. in Childhood Special Education from Manhattanville College. Checkout more from Emily on her blog at beautybump.blogspot.ca