I was provided advance tickets to the screening for the purpose of writing a review. The opinions are my own. 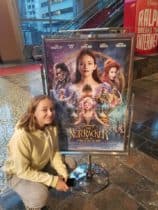 All Clara (Mackenzie Foy) wants is a key – a one-of-a-kind key that will unlock a box that holds a priceless gift from her recently departed mother. A golden thread, presented to her at godfather Drosselmeyer’s (Morgan Freeman) annual holiday party, leads her to the coveted key—which promptly disappears into a strange and mysterious parallel world. It’s there that Clara encounters a soldier named Phillip (Jayden Fowora-Knight), a gang of mice and the regents who preside over three Realms: Land of Snowflakes, Land of Flowers and Land of Sweets. Clara and Phillip must brave the ominous Fourth Realm, home to the tyrant Mother Ginger (Helen Mirren), to retrieve Clara’s key and hopefully return harmony to the unstable world. Starring Keira Knightley as the Sugar Plum Fairy, Disney’s new holiday feature film “The Nutcracker and the Four Realms” is directed by Lasse Hallström and Joe Johnston, and inspired by E.T.A. Hoffmann’s classic tale. 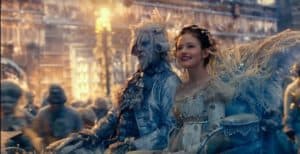 My daughter has danced in our local production of Nutcracker several times so watching this movie on the big screen brought that feeling of nostalgia and Christmas feel instantaneous. The realms and the costumes were so intricate that it was really a classic twist on the Nutcracker, mixed with a Chronicles of Narnia vibe, and a sprinkle of Wizard of Oz. There was something for the people who love the ballet version and perfect classic holiday tale for someone completely unfamiliar with the story. If you are fearful of real mice I would recommend a bathroom break moments after Clara sees the shooting star. The mice aside, the movie was suspenseful but not scary. There were minor fight scenes but overall tame. I may be wrong but with all Disney movie’s having a connection to each other I thought I had spotted an Ursula figurine on the Sugar Plum fairies shelf. Let me know in the comments if you spotted it as well or if I am completely off-base. 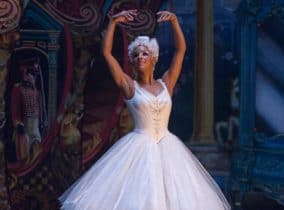 I personally was in awe of Misty Copeland who plays the Ballerina Princess. She dances in a way that looks so effortless, which I know it is far from it, and so powerful all at the same time. She was a considered a prodigy, who became an award-winning dancer, despite not starting ballet until the age of 13, which is very late. In 2015, she became the first African American woman to be promoted to principal dancer in American Ballet Theatre’s 75 year history. I appreciated the fact that ballet was able to be sprinkled into this version without it feeling forced.

I walked away from this movie wanting to put on matching holiday pajamas and decorate my Christmas tree. I highly recommend adding it to your must watch before the holidays this year.