I was provided tickets to this film for the purpose of this review. All opinions listed are my own.

Boy Erased tells the courageous story of teenage Jared Eamons (Lucas Hedges), the son of a Baptist pastor in a small town in Arkansas, who must overcome the fallout of being unexpectedly outed to his parents (Nicole Kidman and Russell Crowe). His parents struggle with reconciling their love for their son with their religious beliefs. Given the ultimatum of a loss of family, friends, and community, Jared is pressured into attending a conversion therapy program. While there, Jared comes into conflict with its leader (Joel Edgerton) and begins his journey to finding his own voice and accepting his true self.

Lucas Hedges is exceptional in his portrayal of Jared. He quietly suffers in his life of fear and wanting to be normal in the eyes of his parents, religion and community. This movie largely is shown in flashbacks of the year leading up to his time in conversion camp. We see him uncomfortable “parking” with his cheerleader girlfriend, a sexual assault from his college crush and confession to his parents. Jared wants to people please and tends to put on a happy face for his mother, who stays at a motel with him, while he attends an out-patient camp. There is a beautiful scene where Jared’s family doctor tries to tell him that he is a normal, healthy boy but faced with the pressure his family had put on him doesn’t feel like a message he is able to receive. His parents are a product of their environment and as much as they love him they truly thought they were doing what was best. Flea, from Red Hot Chili Peppers, portrays an ex-junkie drill sergeant working in the camp to help teach the participants “to become the men you are not.” He portrays his role perfectly as absolutely abhorrent person in the camp. 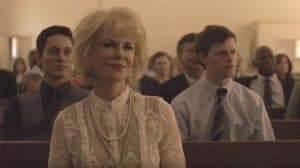 This movie was very difficult to watch and is triggering no matter which side of the issue you stand for. There were a few people who walked out of the theatre that I was in. I believe that people are born gay and that there is nothing wrong with that. For me, it breaks my heart that the “pray the gay away” camps exist and that people live thinking that there is something wrong with them for having their natural instincts. One of the hardest things for me watching this movie was the end credits where we are informed that 700,000 million people have been impacted by these camps and that they are perfectly legal and still operational. I find that when I see commercials of starving orphans in third-world countries that I want to send them money for food, this movie made me want to adopt gay teenagers and let them know that not everyone is that cruel. Ultimately my take away was a reminder to be kinder and gentler to people.