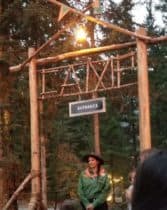 Vallea Lumnia is located in Whistler on Cougar Mountain. I booked my family into the 9pm start time and received the confirmation email advising to meet the bus 40 minutes prior to that time. Parking in Whistler Village is free starting after 5pm and the shuttle to Cougar Mountain was complimentary with pick up at the Gondola Transit Exchange. When we arrived at our scheduled time to catch the shuttle we were advised that they were full and had to wait for the next one which came about 20 minutes later. The drive up to the mountain was quick. Once at the venue we were greeted by a camp ranger who advised us that tours were not starting until it was fully dark out. There were camp fires that guests could sit around, s’mores were being sold for $4 for anyone wanting to roast them, and outdoor Jenga games available. At this time I should have reviewed our tickets closer because while I booked a 9pm tour our start time to be let in was actually 8:20pm. We stood by the gate longer than needed and a camp ranger pointed out that we should have been paying closer attention which I didn’t find overly helpful.

Once inside I didn’t really know what to expect other than there was a light display. I was pleasantly surprised to learn that we were following the path that two “lost” hikers in this enchanted forest. The website does warn that this hike in the woods is dark, has many stairs and can take up to 80 minutes. I really liked that the tour is self-paced so if you are older, less in shape or want to stop to take pictures you can stay to one side and let others pass you. I do recommend taking this tour with hiking boots or sturdy running shoes. The trail is not stroller accessible so if going plan to use a baby carrier. The trail was nicely lit and had ropes to act as a railing to hold on to in large sections of the path but if the weather was wet when going it could have been quite slippery. There are many benches set up so that you can rest if needed. 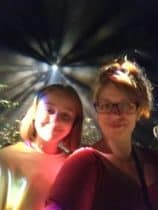 My pictures really don’t do these lights justice. I really liked the light up fish that were in the water and the holograms were breathtaking. They also lit the path with sliced up logs that had lights inside that I thought would be perfect for a backyard setting. They do use strobe lighting in different sections of the trails so if you suffer from epilepsy this may not be ideal for you. The lights started off a bit limited but really did get so much better the farther we walked.

We made it from start to finish in just over an hour. Once at the top of the camp we were able to play games or sit by the fire again if we wanted. We headed back to where the shuttle would drive us back to the village. While we waited camp rangers were chatting with everyone to help pass the time. They were very friendly. The bus driver on the other hand had clearly had a rough night. He proceeded to complain about lack of buses, bus drivers being willing to work the short shifts and the rate of pay that they are losing taking those shifts. I am a firm believer that good customer service means that you don’t complain to customers about a job that you are currently doing especially when no one is forcing you to do that job. With the shuttles up and down the mountain being a bit disorganized I recommend booking the tour earlier in the evening than later so that you don’t have any issues getting to the site as there is no parking available. Whistler can be quite expensive so I appreciated that this tour is roughly $30/per person making it a more reasonably priced activity compared to some other tour options available.

Vallea Lumnia is running until October 2018. To get tickets click here.