Ah, the terrible twos (or threes). It is no doubt a challenging stage, both for parent and child. Mainly because of that dreaded, inevitable stage of tantrum throwing, a series of fits, and battles.

What makes this stage so “terrible”?

Though the phase is affectionately named “terrible twos”, it doesn’t really mean that the child is being terrible at all. However, there are a few things that typically happens at the turn of the second year, the main new thing being temper tantrums.

At this stage, toddlers seem to spike in their tantrum throwing, seeming to be not listening to the parents, getting a lot more frustrated, and throwing down a battle with you to try to get what they want. It’s trying because your sweet baby is suddenly trying to mark their independence, which makes you feel like pulling out your hair.  Yes, terrible…well, maybe we can make it a bit better.

Why the sudden surge in tantrums?

It’s important to understand why the temper tantrums are occurring instead of just assuming that your child is not listening to you or being “bad.” In fact, that’s not the case at all.

Here is a list of a few things that are happening:

All of the above causes them to get frazzled, and hence the tantrum occurs. 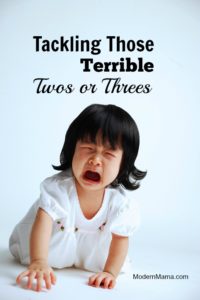 What to do when a tantrum strikes?

While frustrating to be dealing with a screaming toddler, one of the best things you can do is to appear calm and supportive. Try to refrain from yelling back, this will only escalate the battle and make them feel more misunderstood, and the tantrum may last longer, or occur over and over.

Here are some tips we found key to tackling a tantrum:

*All images courtesy of ShutterStock.com