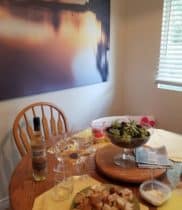 This week’s Bachelor Monday menu was really simple. We try to stick to appetizers and I managed to find red rose cupcakes at the local grocery store.

This week kicked off with a pirate themed group date. The group date turned out to be a battle of the pageant queens (Caelynn and Hannah B). Caelynn saved Colton from the plank which seemed to strengthen his crush on her and Hannah B just began to let her insecurities get the best of her. She decided to loop Colton in on the women’s past drama which she should have realized from previous seasons was not going to get the reaction she intended. Hannah B told Colton a vague story on why Caelynn didn’t deserve to be there which seemed to be focused more on past competitions and not anything specific about their brief time in the house. She unintentionally made it seem like if he liked Caelynn he couldn’t possibly like Hannah B because they are so different. Colton confronted Caelynn to get her side of the story. Caelynn cried but didn’t really offer up any additional details but said she would be willing to talk about it at a later time. Colton ended up comforting her in the end so Hannah B may have helped strengthen their relationship while damaging her own. It is a great reminder to think before speaking and really ask yourself if whatever it is, does it need to be said. 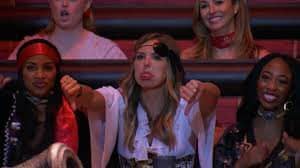 After the pirate shenanigans, Demi being Demi had to make her own drama. Tracy was very over sensitive every time Demi spoke throughout the episode. Demi pulled the age card again and said as an older women she would feel super uncomfortable surrounded by younger women and that there is no advantage to them being there. Wonder why they don’t like her and keep trying to school her on etiquette? Courtney had just sat down for alone time with Colton when Demi thought that was the perfect moment to score her own alone time. Courtney stormed off and Demi proceeds to blindfold Colton and spank him with a paddle. She also pretended to grope him with a plastic hand. Before Demi had a chance to sit down with the ladies, Courtney asked to talk to her in private. Demi was visibly annoyed and clearly a waste of time conversation. Courtney informed Demi she might be making a bad impression on the other ladies and like previous villains before her Demi advised she didn’t care. 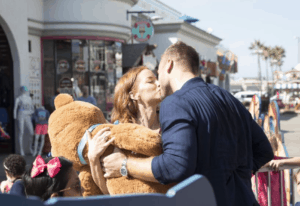 The one-on-one date was a helicopter tour of San Diego for Elyse and Colton. They went to Belmont Park with a bunch of kids. It gave Elyse an opportunity to see the charitable work Colton does. After the amusement park, they went to dinner where Elyse opened up to Colton. She shared a story of how she lost her sister to cancer shortly after she had a baby. Elyse got a rose and they ended the evening at a Tenille Arts concert.

The second group date was a fitness challenge hosted by Terry Crews (Brooklyn 99) and his wife Rebecca. They have been married 29 years. The girls had to compete in the Bachelor Strongest Woman contest. Chris Harrison and Fred Willard (Modern Family) did the commentary. Challenges including pushing a 100lbs wedding cake down the aisle, tire ring toss, limo pull and heavy heart. Onyeka kicked butt at the challenges and was the medal winner. Colton even scored her some wedding cake but she didn’t win the rose during the date like she hoped. Nicole scored that prize. Colton tried to connect with Caitlin but she couldn’t think of anything else to tell him other than she looked forward to introducing Colton to her friends. He decided that his connections with the other women were stronger so he sent Caitlin home during the group date. 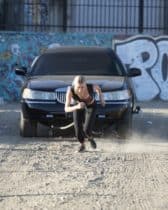 Colton decided that he didn’t need a cocktail party to help him decide who to send home and hoped to throw a fun, carefree pool party instead. Demi was the first to take his shirt off and oil him up. The pageant queen drama ramped up and ruined the fun. If I were Colton I would have sent the instigator (Hannah B) home during the party. She was convinced that Colton hated her and that she ruined her chances but he gave both women roses to continue their drama into future episodes

This week ended with Catherine (and Lucy), Bri and Nina were sent home.

The Bachelor airs on ABC on Monday’s.