Sept 14, 2015,– Scientists have found that head lice are becoming immune to the most common treatments used by parents. In a report presented at the 250th National Meeting & Exposition of the American Chemical Society (ACS), the world’s largest scientific society, researchers revealed that lice populations throughout the US have developed resistance to over-the-counter treatments still widely recommended by schools. That means many parents and teachers will be fighting a losing battle when it comes to lice outbreaks unless they are properly prepared.

“There are prescription drugs available, such as Spinosad (Natroba) and ivermectin (Sklice) to treat lice. But prevention, early detection and immediate action are your best bets to fight lice,” says Jason Chan-Remillard, Pharmacist at London Drugs.

It has been estimated that over than two million Canadians experience head lice per year, and the lice fact sheet from Alberta Health Services states that at any one time, 10 per cent of elementary school children can have head lice. Throughout the year, many schools report head lice cases to parents so they can take preventative measures at home.

“If a note gets sent home that another child has it, parents should immediately inspect their children’s clothing – especially hats and scarves – sporting equipment like helmets, and pillows. They should look for eggs.”

Eggs are yellow, brown or tan objects that look like tiny seeds. And They can be difficult to spot. However, a new medical device launched in Canada this year, helps parents easily spot lice and remove them without the use of chemical based products. The Nitview LED Lice Detection Device incorporates ultraviolet light and a detachable comb with micro channelled teeth for removal of both lice and nits. The lice and their eggs grow under the UV light making them very easy to find amongst the hairs and remove them with a comb. The device can also be used to check clothing, towels and bed linen.

“It’s important to remember that head lice are more of a nuisance than a serious health risk. They don’t carry disease. Chemicals and antibiotics should be considered a second line treatment,” says Chan-Remillard.

If you notice any of these signs, Chan-Remillard says, “manual removal using a tool like Nitview is preferred. If lice are noticed before they multiply exponentially, the removal process will be far less tedious.” 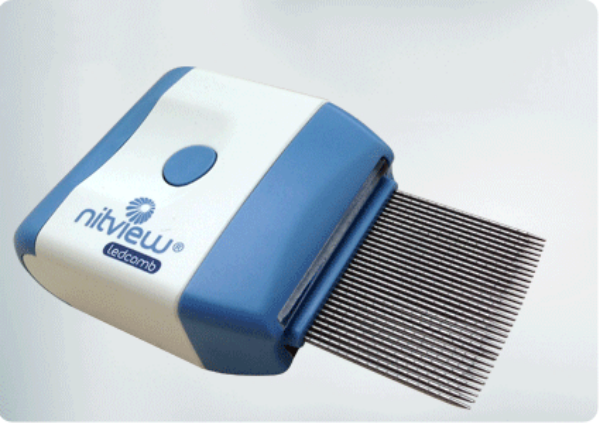 Nitview® Ledcomb was patented in Spain, and is being distributed across Canada, Italy, United Kingdom, and Australia. Nitview® incorporates a patented ultraLED lamp with a special detachable comb with micro channelled teeth for the removal of lice and nits.