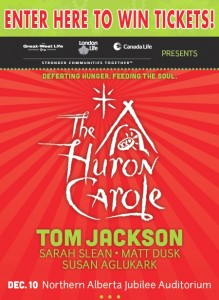 Over 20 years ago, Tom Jackson began cultivating a network of Canadian artists, who shared a common interest in helping our country’s needy. After many successful years of raising funds through The Huron Carole, Tom put the project to rest in 2004. He spent the next seven years bringing Singing for Supper to smaller communities. As a result of the increasing need for food banks across the country, Tom and friends are breathing life back into The Huron Carole.

The Huron Carole benefit concert series was founded by the Canadian actor and singer in 1987. The concert was named after Canada’s first Christmas carol, composed in 1641 by Father Jean de Brebeuf, a Jesuit Priest known for his missionary work with the people of Huronia. The carol was kept alive in the Huron language for over one hundred years before being translated to French and English.

Through the concert series, which is filled with Christmas music and stories that embrace messages of peace, harmony and optimism, Tom hopes to inspire Canadians to take action to help eliminate hunger this holiday season. “Today, over 900,000 Canadians visit food banks monthly. Food bank workers, volunteers and supporters rely on awareness-building to accomplish their mission of ending hunger,” said Tom. “With the strength of each artist’s voice onstage, this year’s Huron Carole will expand our ability to raise funds, awareness and hope, creating change one song at a time.”

“Defeat Hunger & Feed the Soul” on December 10th at 8pm at the Northern Jubilee Auditorium. Tickets range in price from $40-$60. Purchase tickets and check out The Huron Carole online- Website, Facebook & You Tube.

CONTEST: Enter to win 2 tickets to the Huron Carole on December 10th. Tell us what your favorite Christmas Carol is in the comments below. Get extra entries by liking us on Facebook or following us on twitter (add an additional comment to let us know about each like or follow). Open to Canadian residents only. Contest closes November 23rd at 6pm (MST).