I was provided the opportunity to interview the author and provided a copy of the book. 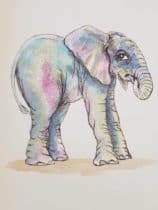 Ruth James is the author of the soon-to-be-released children’s book Paseka. Paseka  is based on the true story of an orphaned calf from Botswana, Africa, and her harrowing journey to survive and find a new family. There has recently been a significant, 600% increase in elephant poaching. It’s a touching, powerful tale for children on resilience and courage, and recognizing that we are never truly alone. Ruth will be holding family-friendly event for Paseka this May at Kidsbooks in Vancouver, BC on Thursday, May 2 at 7pm. I was given the opportunity to interview Ruth on her love of Africa and upcoming book, Paseka.

What makes Paseka so inspiring to you that you needed to tell the story?

Did you know that an elephant has over 100,000 muscles in her trunk? A tiny baby trunk has to learn many skills; eating, sucking up water, digging, making sounds, exploring, and using the two “fingers” at its tip, embracing others, saying hello and Paseka had to manage all that by herself because she was a young orphan. When I learned a little bit of how she had survived I thought both children and adults would be as fascinated as I was.

What sparked your interest with elephants?

Elephants are the world’s largest land mammals. The herd is led by the oldest cow, the wise matriarch. She imparts her knowledge through female lines. Babies walk under their mothers for protection. The whole herd watches over them. In a sense an elephant herd is the essence of shared community.

What do you think is causing poaching numbers to increase?

Elephant populations are at risk because of poverty, loss of habitat, climate change and the continued global demand for ivory. During 12 years of teaching in public schools of Tanzania, a country with magnificent wildlife, only two children told me they had seen a real live elephant. I hope Paseka’s quest to find family will build compassionate empathy for vulnerable elephants.

What do you hope readers take away from this story?

Paseka’s story speaks to the crisis of elephant poaching and human encroachment, which threatens to wipe out the world’s population of these magnificent animals.
But it also speaks to the need for children to have stories that touch them deeply and stir them to believe in their own ability to overcome hardship. The strength and love of the wider community vividly touches Paseka and restores her. 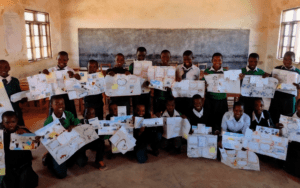 What is the African Children’s Book Box Society and is there a way for our readers to get involved?

Founded in Nairobi, Kenya in 1991, the Society distributes portable libraries of African Books in the form of “Book Boxes” to African schools. Since 2007, the expanded objective is to also contribute to the well-being of African children and their caregivers. There is lots more information to be found on our website. www.africanbookbox.org. Just by purchasing Paseka – A Little Elephant, Brave you will be helping!

Do you have plans to write more stories and if yes do you have your next book in mind?

Yes, I would like to write a novel for children 8 to 12 years old.. It would attempt to marry the mathematical Fibonacci spiral pattern with the narrative. The characters might be a sixty-five million year old fossil ammonite, a Pacific tree frog named Oh-ratch, a fierce territorial Anna’s green hummingbird and an eight year old boy who is allergic to school.

What inspires you to write books for children?

Stories provide intellectual nourishment for human beings all over the world. One can step into an imaginative world and live with the characters as they negotiate and react to the scenes, experiences and dilemmas constructed within the narrative. A teacher is entrusted with young children, society’s youth and it is a privilege that can be exhausting, intriguing and exhilarating. Sharing the wonder of books and tell-aloud stories allows the children and the teacher/author to enter the realm of possibility together. 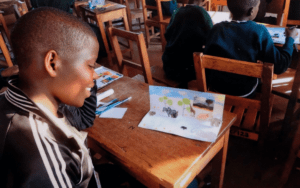 What are your three favourite things about Africa?

The children, the children, the children! Whether it is a small classroom of 50 children or the maximum (that I have encountered) of 143 boys and girls in a standard one class, chigger infected toes poking out of dilapidated shoes, ignoring the necessary, tattered, buttonless uniform two brothers before you wore, walking long dangerous kilometres, sometimes eating just once a day, using a newsprint notebook three times- pencil first, blue ink and then finally red ink over top, sitting in a classroom with rust holes in the corrugated metal roof letting dappled sunlight in where there is no electricity and still radiating unadulterated joy when presented with your very first story book to keep and possibly take home!

What is one misconception people have about Africa or elephants that you hope your book helps change?

It is my hope that children from many countries will read Paseka’s tale of survival and come—not only to empathize but to fall in love with Paseka- A Little elephant , Brave…and her remarkable species! The gentle giants, so similar to humans in many ways need our collective voices to speak for them.

What was your favourite book growing up?

According to family lore, as a small girl, 4 years old, I would march about clutching a yellow storybook entitled Mr. Bear Squash-You-All-Flat. “Read, read, read!” I would shout. There was no skipping of pages tolerated. My Nana came close to resigning as the family babysitter exclaiming “I cannot read that
blinking story one more time.” I would still like to be able to ask her to read it just ONE more time!

We are giving away ONE copy of this book.