Our latest How Does She Do It?.. mama is Chelsea Bird she is a radio host, wife, and mother of one. Chelsea is an award-winning broadcaster, who has called Edmonton home for the last decade. After graduating with honours from NAIT’s TV & radio broadcasting program in 2012, she began her on-air career on 103.9 CISN Country. She quickly took over the afternoon drive show, which she co-hosted for nearly three years. After making the move to co-host the morning show on 104.9 Virgin Radio for the following three and a half years, Chelsea took a break from radio to appear on Global’s Big Brother Canada Season 7; the highest-rated season of the show’s history. In 2013, Chelsea was named one of Edmonton’s Sizzling Top 20 under 30 for her accomplishments and involvement in the community. She most recently hosted the Alberta-made TV show The Moment. 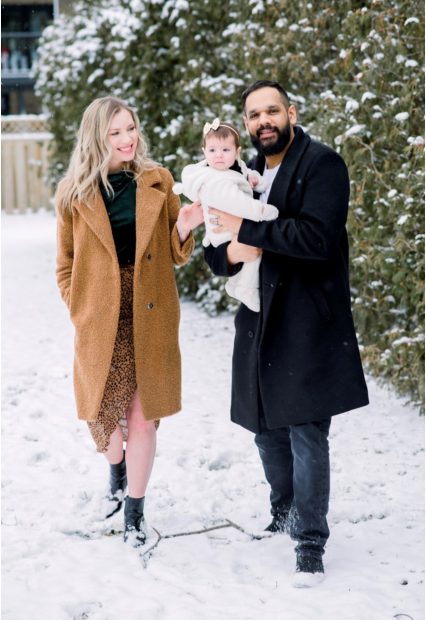 Are you an Urban or Suburban Mama, where do you live?

I’m an Urban mama! I love being in the heart of the city – being in the core of Edmonton and close to where the action is feels right to me. I recognize it’s a bit of a trade-off when it comes to noise level, space etc…but it’s the right place for me 🙂

Tell us about your children?

I have a 10 month-old daughter, Layla. She is absolutely my sunshine. I swear she has a little mischievous side to her already, and I can tell she has her dad’s killer sense of humour. She is a little ball of energy and has the best giggle that makes me melt every time I hear it.

Tell us about your typical weekday?

Once the show is over and we plan for the next day on-air, I pick up Layla around 11am and then head home to (hopefully) get in a quick nap while she snoozes!

We play, do some meal prep, go outside for a walk, have dinner and get Layla down to bed.

IF there’s not an Oilers game that night – then I’ll do some show prep for the next day, watch a show with hubby and go to bed for around 9pm.

BUT – if there’s an Oilers game – after Layla is down to bed, I’ll head to Rogers Place and it’s lights, camera, action as the in-game host. Game days make for a longer day, but the rush of amping up 18,000 screaming hockey fans is an adrenaline rush that can easily keep me going 🙂 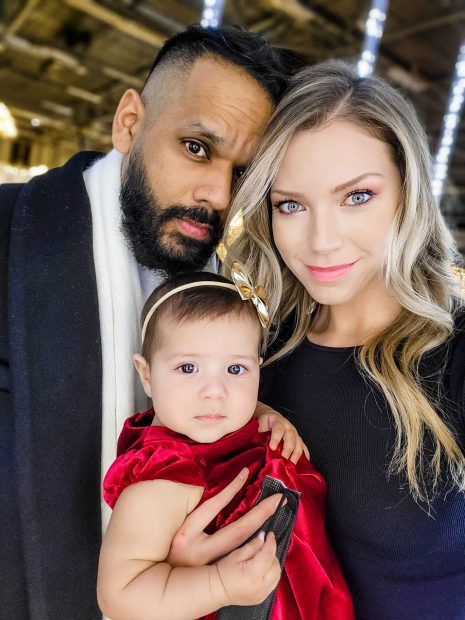 Do you have help?

Yes! My husband is a huge help, so is Layla’s daycare! Right now though, she’s in a phase where all she ever wants is mom. All the help in the world can’t change that 😉

The majority of the time it’s me – but we’ll allow ourselves to order a couple times a month when the day gets away from us. My mother in law is also really amazing at stocking our freezer with homemade meals (she’s an amazing cook) so we’re very lucky to have something easy to heat up on busy nights!

How often do you buy something just for you?

Hahaha they used to know me by name at Aritzia, so I’m trying to reign that in!

Do you exercise regularly and if so, what and how do you fit it in?

Weights: a 20-pound baby that loves to be held by mommy. 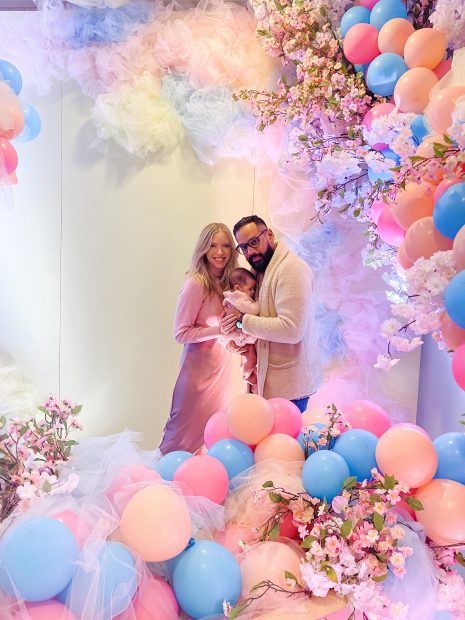 What clothing lines or stores do you like to buy for your children?

I love Kyte for pyjamas and sleep sacks…but kids grow fast! Brands like H&M and Carter’s that seem to always have sales are great.

Three things in my purse right now are…

My favourite drugstore buy is?

My guilty pleasure is?