* I was provided with complimentary tickets to attend the pre-screening, As always all my opinions are my own*

All Clara (Mackenzie Foy) wants is a key – a one-of-a-kind key that will unlock a box that holds a priceless gift from her recently departed mother. A golden thread, presented to her at godfather Drosselmeyer’s (Morgan Freeman) annual holiday party, leads her to the coveted key—which promptly disappears into a strange and mysterious parallel world. It’s there that Clara encounters a soldier named Phillip (Jayden Fowora-Knight), a gang of mice and the regents who preside over three Realms: Land of Snowflakes, Land of Flowers and Land of Sweets. Clara and Phillip must brave the ominous Fourth Realm, home to the tyrant Mother Ginger (Helen Mirren), to retrieve Clara’s key and hopefully return harmony to the unstable world. Starring Keira Knightley as the Sugar Plum Fairy, Disney’s new holiday feature film “The Nutcracker and the Four Realms” is directed by Lasse Hallström and Joe Johnston, and inspired by E.T.A. Hoffmann’s classic tale. 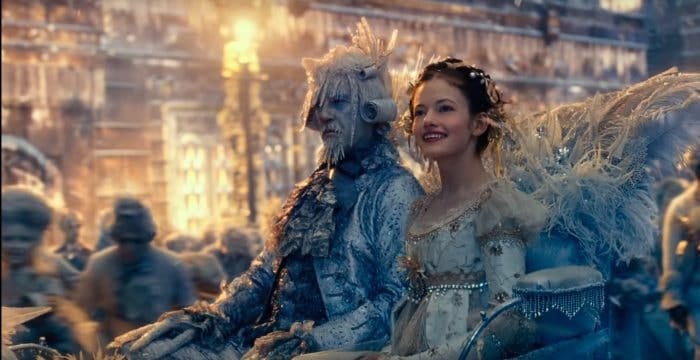 When we first saw the previews of the Nutcracker I wasn’t sure how if it was a bit too scary for my 6 year’s old daughter. Of course, she was excited to attend the movie as she has been doing ballet for the past 3 years. Lucky for us the scariest part of the movie was shown in the previews when Clara meets mother ginger and her mice! Besides that one part that we knew was coming the rest of the movie was harmless. The overall feel of the movie was very much like The Chronicles Of Narnia. Especially during the part of the movie where she transitions into the new world. A focal point of the movie shows Clara as she is trying to cope with the loss of her mother. And having lost my mother back in January this stirred up a lot of feelings for me.

Like I have said with my previous post about Disney’s Christopher Robin, Disney is going much darker with their films. I felt that even though this film was targeted at pre-teens that it could still be enjoyable for the whole family. Between the gorgeous costumes, beautiful music, and ballet dancing there is something for everyone. It is hard to know what to expect when a ballet is made into a movie, how much of the original you can expect to be brought into the film. I believe Disney does a wonderful job at keeping in some of the classic Nutcracker essence while telling a new story.

If you’re looking for a holiday film the season this one should be on your list!