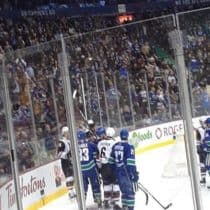 I bought a Kidsworld 44 pass in September and is valid until June 2019. The pass is currently on sale for $30+tax. The events are aimed at ages 4-13. The pass is in the child’s name and includes free entrance for any accompanying adult as well. The adult could be different for any event. This adult is responsible for the child at each event. Events are primarily non-school days to allow greatest opportunity for anyone to attend.

The pass includes reservation events and regularly scheduled events. Both are included with the initial post of the pass. 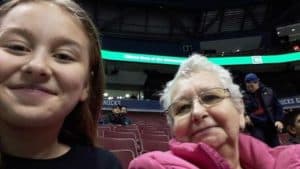 One of the reservation events was the Canucks vs Arizona hockey game. My grandmother was a diehard Canucks fan. When I was growing up her basement was filled with team memorabilia and she used to be a season ticket holder. Her seats were right by the Canucks bench. I remember the excitement of watching the game live with her and how much fun it was to spend time with her. My daughter and I are not exactly sports fans currently. I thought that the Kidsworld activity would be a fun way to break up the routine of the first week back-to-school after winter break and couldn’t resist sending my daughter with my grandmother to her first hockey game. They had fantastic seats near the ice. It also happened to be Star Wars night in the arena so they were gifted masks upon entering. The Vancouver Symphony Orchestra was also there that evening performing. The Canucks went into overtime which made for an exciting end to a game that they came close to winning. 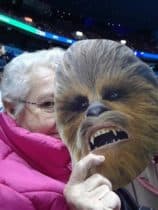 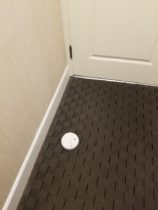 We had decided a few days before the game that we would get a hotel and stay overnight. We stayed at the Sandman Hotel in Vancouver which is somewhere that we have stayed numerous times before. This time was by far my least favourite. I didn’t really plan much to do during the game. I had forgotten my bathing suit and dinner plans with friends had fallen through. I was tired from getting in to the back-to-school routine so ultimately planned on vegging in our room and getting dinner. Before the game had started my grandmother had tried to turn on the TV but couldn’t get a signal. We had unplugged to see if that would help but it didn’t. After they left I attempted to call the lobby, for an hour with no luck, to ask about the TV.  I had decided to go for a walk and order dinner, on my way out I had to interrupt the front desk staff’s conversation about their weekend plans to let them know about the TV. I was informed that they would send someone to my room. I came back an hour later with food and no change to the cable. I had to call down again to have someone come up which they did. His solution was to unplug the television which we had previously tried. I had asked if they had been having issues with the cable which he advised that they weren’t but that they were in the process of switching TV’s and that the one in our room wasn’t very common anymore and thought that might be part of the issue. He left and said he would return with our new room keys in 10-15 minutes. I got my jacket on, packed up our belongings and my half-eaten dinner to have him return in 45 minutes. We were moved 4 doors down and upon entering I realized that our fire alarm was laying in the hallway. I wasn’t willing to call down and repeat the last cycle again. I know that customer service isn’t what it once was but having stayed at this hotel before the reaction from the morning staff was quite disappointing. At checkout I let the front desk know about the TV and the fire alarm. There was no apology for the inconvenience or to make attempts to make us want to return again but instead made sure that she blamed the cable company for the issues with the TV. In hindsight I would have driven in to the city and return home that evening.