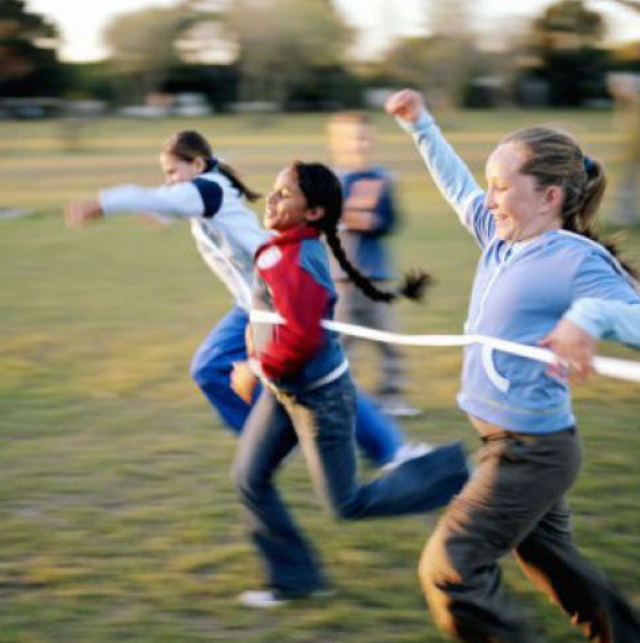 Like many others around the world, my family were glued to our televisions for the past two weeks watching the Winter Olympics in Sochi. At first my girls – ages 7 and 4 – were only interested in figure skating – a sport they already knew. But over time they were both sucked into other sports – curling, snowboarding, speed skating and yes, even biathlon.

An unavoidable result of watching so many hours of athletic competition and witnessing many athletes crying from either complete happiness or utter disappointment…it brings up a few questions.

After watching one of the favourites in men’s figure skating fall three times during his program and subsequently cry into his coach’s shoulder, my oldest daughter said:

“Why is he crying? It doesn’t matter that he didn’t win.”

At first I was pretty happy (even a little proud) about her response because we have always tried to teach our children that it’s not about winning or losing but more “how you play the game”.

But this situation was a little different.

This was an elite athlete

This was an elite athlete that had trained all his life for this moment and he failed. And so we talked about why he was feeling sad and why he might be feeling disappointed. And that sometimes it is about winning. Especially considering this was essentially his job.

Because even though we try to teach our children that winning isn’t the most important thing, we also need to teach them that competition is. And it is something that they will experience almost every day in their lives.

That said, it’s a fine line between teaching the importance of competition and the value of being a gracious loser. It is also important to make sure your children know that they will not be good at everything they try.

I still struggle with this

I am a person that wants to be good at anything I do the first time I do it. Take golf for example. My husband loves playing golf and – several years ago – asked me to come with him to the driving range. I agreed figuring that even though it wasn’t my first choice of activities it would probably be fun to whack a few balls and watch them soar through the air out of sight.

You have probably guessed how this story ends. I couldn’t hit that damn tiny white ball to save my life. Couldn’t get it to go more than a few feet from the tee. And I never made that satisfying “thwack” sound I was expecting. All in all…I had a miserable time.

But rather than saying I will try it again I decided golf was a stupid game and I was never going to waste my time with it again. And I haven’t picked up a club since then. Except at mini golf.

Now this was before I had kids of course and didn’t have to worry about the optics of me not handling failure well. Not so much anymore.

As parents we are constantly in teaching mode and our kids are watching how we act and react as a guide for their own behaviours.  So now I’m careful about making sure to try new sports and foods and other such things.

Last June my daughter came home from Sports Day and couldn’t wait to tell me all about it.  She told me about her team colour (green), her team name (Great Green Slytherins) and her favourite event (the three-legged race).  Then I asked her who won.

We are all winners

“We were all winners.” she said simply.

“Right…” I said with only a mild sarcastic tone. “Of course you were sweetie…but what team came in first place? Who got the blue ribbon?”

“No mummy…” she said, clearly irritated by my obtuseness. “As long as you try your best, everyone wins at Sports Day.”

It’s a lovely thought…a sweet sentiment…to have every kid “win” at Sports Day. But it’s not a true reflection of the world we will one day be sending our kids out into.

Because in life there are definitely winners and losers. There are no participation ribbons when you don’t get a job you really wanted or are overlooked for a promotion.

Knowing their own strengths and weaknesses is empowering for children. It teaches them the areas that they will need to work harder on and those they might not.  I knew early on that I was not the athletic type…but on Sports Day I tried my hardest to win a blue ribbon.

Do you encourage a competitive spirit in your children?

Kelly started her blog – Writing Down the Bones – in 2013 to satisfy her need for a writing outlet as well as create a diary of her life as a working mother of 2. In those rare moments of free time not spent with her family you can usually find Kelly writing in the hopes of one day completing that novel she started oh so many years ago. She is also a ‘newbie’ runner and recently completed her first 5k race with sights set on running a half marathon in 2015. You can also find her on Twitter @kelsey_bar