The movie was not a gifted experience but this article contains affiliate links if interested in purchasing the book.

I found with the trailer and promo for the movie, the cast was so vague about the movie’s plot and I had not read the book that I really wasn’t sure what to expect with this movie. 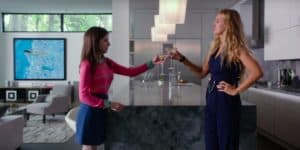 Stephanie is an awkward, over-achieving, classroom volunteer, with a Mommy vlog. She is a widow with a school aged son, Miles, who befriends Nicky. Nicky’s mom is the glamorous and mysterious PR director Emily. The polar opposite moms get sucked into having a play date which leads to after-school martinis. Stephanie was happy to have any friends and seemed confused as to why Emily would want to hang out with her. The two become instant best friends, with routine after-school gin martinis, and big secret sharing sessions. Stephanie’s friendship starts to influence how she dresses, and her vlog turns from mom tips to martini recipes and hangover hacks.  Emily appears to have it all– loving attractive husband, perfect house, and glamorous job but when she asks Stephanie to pick up Nicky after school then disappears we learn nothing is it appears. This leads Stephanie to turn into amateur sleuth. She turns her vlog into a place to give updates on her missing friend. It turns her low viewership into a viral success. Stephanie starts to get clues about the disappearance from her vlog which leads her deeper into trying to solve this mystery. The story does a really good job of leading viewers down one path only to switch directions. Did Emily runaway? Is she missing? Is she dead? All the characters have a very detailed back story which makes you wonder how innocent any of them really are. 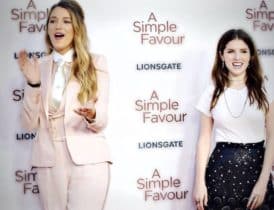 Awkward Anna Kendrick and captivating Blake Lively play off of each other so well that it is really fun to watch. Paul Feig, who directed Spy and Bridesmaids, did a really good job of making this funnier than I was expecting. This movie isn’t very violent but does have a fair amount of nudity and non-graphic sex scenes. The supporting characters are really scene stealers. Andrew Randalls is comedy gold. He plays the perfect judgy Dad that you can’t help but want to be bff’s with.