I was provided with advanced screening tickets to facilitate this review. All opinions are my own.

Disneynature’s all-new feature film “Penguins” is a coming of age story about an Adélie penguin named Steve, who joins millions of fellow males in the icy Antarctic spring on a quest to build a suitable nest, find a life partner, and start a family. None of it comes easily for him, especially considering he’s targeted by everything from killer whales to leopard seals, who unapologetically threaten his happily ever after. A percentage of ticket sales from opening week (April 17th to April 23rd, 2019) will be donated to the Wildlife Conservation Network through the Disney Conservation Fund to support penguin conservation, with a minimum guaranteed donation of $100,000.

I was expecting more of a documentary but was pleasantly surprised that it was more of a comedy following the trials and tribulations of newly matched first time parents. I was taken back on how much green space vs snowy space there were in Antarctica. Viewers follow Steve as he tries to build a perfect nest, meet his mate, protect his eggs from predators, swim safely in amongst predators, learn to feed his offspring, prep for the water freezing over and teach his offspring to survive on their own. Ed Helm narrates this film. He brings a funny, warm nature to Steve that makes his truly loveable.

This film is rated G and is really enjoyable for all ages. There are a few scenes that young children might find a bit intense. In nature the penguins must face predators and the elements. None of the scenes are graphic but discussions with children on what to expect may be needed. When in doubt plan a bathroom break for when Steve and the other penguins meets the sea lions. From the filmmaking team behind “Bears” and “Chimpanzee” Disneynature‘s “Penguins” opens in theatres nationwide in time for Earth Day. 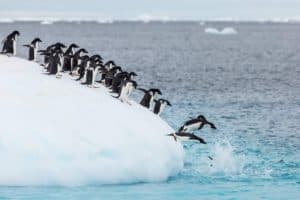 As the credits roll viewers get a glimpse at the filmmakers in action. The team took 4 years to create “Penguins.”