Reading over the summer is an effective tool in helping your children be better prepared for back-to-school.

We are big readers in our household. My daughter, 11, still enjoys being read to so these are the books that we have chosen to read together this summer. My daughter has the freedom to choose books that seem interesting to her but may not be everyone’s preferences. 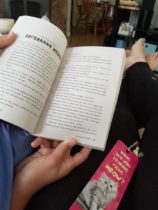 The school bully, Chase Ambrose, falls off his roof and wakes up with amnesia. He has to re-learn who he was and decide who he is going to be.

We started off our summer reading this book and I thought that it was fantastic. Each chapter follows a different character’s perspective which allowed for my daughter and I to discuss how perception of a situation can really be misread. It also has great lessons on school cliques, second chances, family dynamics and more.

Hocus Pocus & The All New Sequel

For anyone who hasn’t seen the movie, Max Dennison and his family move from California to Salem, Massachusetts. While trying to impress a girl, Allison, he accidently breaks a curse that releases a coven of witches, the Sanderson sisters, from the afterlife. The original follows the challenge of stopping the witches. The sequel is set 25 years later when Max and Allison’s 17 year old daughter, Poppy, spends her Halloween fighting to stop the Sanderson sisters once again.

The movie is a must watch in our household every October so when my daughter saw this book in the store her expression let me know it was a must read. 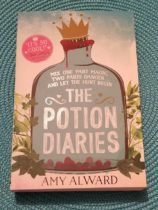 The Potion Diaries by Amy Alward

The Princess of Nova accidentally poisons herself with a love potion meant for someone else and falls madly in love with herself. A nationwide hunt starts to find the cure. Samantha’s family were once the most respected alchemists in the kingdom but have fallen on hard times. Finding the cure could save or ruin what is left of Samantha’s families reputation. 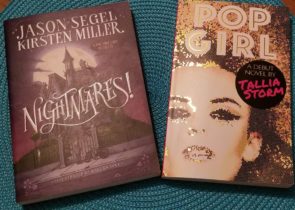 Thirteen year old, Storm Hall, has a dream of being a professional singer. The Scottish girl is forced to miss a national singing competition to go on a once-in-a-lifetime family vacation to Hawaii. In Hawaii, she meets a band that needs a singer and is so excited to hear herself on the radio, until the band introduces the singer on air and it’s not her.

Charlie is convinced that his new step-mother is a witch and is forced to move into the purple mansion which is the creepiest place in his town. Charlie is struggling to sleep without having nightmares which would be bad enough but his nightmares start to slip out of his dreams and into the real world.

Fun Fact: Jason Segel is the actor who was in Forgetting Sarah Marshall, Knocked Up and How I Met Your Mother. 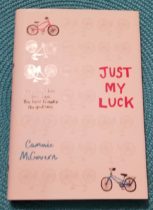 Just My Luck by Cammie McGovern

Benny was taught by his mother that when bad things happen, you should focus on helping others. Benny is finding things are not going as planned. He feels responsible for an accident with his dad, he’s not getting better at riding his bike and no one notices when he is trying to be helpful. Making videos with his toy figurines is the only time that Benny feels like there could be a happy ending and just has to figure out how to make that feeling spill out to the rest of his life.

If looking for a way to engage your children with reading the Fraser Valley Regional Library has a free summer reading program. This year’s theme is Motion in Commotion. Children get a booklet to fill out and bring to the library throughout the summer to get stickers and prizes. To participate please visit your local library.