We spend a week in Whistler every August and love it. We find something different to do every year and this year was our first experience with Canadian Wilderness Adventures. I found the booking process to be quite easy. Once we had selected our date and time we were emailed a confirmation with our itinerary and all needed tour information.I really appreciated that reminders are also emailed the day before.

-No drugs or alcohol

We parked our car in the upper village parking lots which are free after 5pm. They are located about 5 minutes from the Canadian Wilderness Adventure office. Our tour guide for the evening was Ben, who was very accommodating. He grabbed a step stool from the back for my grandmother without being asked. Offered to open all doors for us and gave us the option of having the top on our off of the jeep for the ride. I had booked our tour for the first day of our vacation which also ended up being one of the smokier weather days due to the wildfires in British Columbia and surrounding areas. We went in for the tour knowing that the views were most likely  not going to be what they normally would be but were still excited for the evening. The tour drives up Blackcomb Mountain and I wasn’t sure what that was going to look like whether it was going to be like an-off road excursion or if there was a road but I did wear a regular bra/sports bra combo just to be prepared for anything. I was pleasantly surprised at how gentle of a trip up the mountain was. We were advised that the tour was very flexible. We were able to stop and take lots of pictures and hop out several times throughout the journey up the mountain. Ben also offered to be our photographer which allowed us to get some really nice family shots. 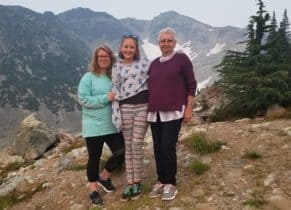 Something that had never occurred to me before was how Whistler was named Whistler. Ben let us know that it was originally called London Mountain but was renamed Whistler after the sound a marmot makes. Marmots are a common sight to see on the mountain. They are the largest species of ground squirrel.  We were lucky to get to see quite a few on our trip and even got a video of one that can be seen here. The marmots are herbivores that feed on specific leaves, flowers, and grass.

Up the mountain we came across pink snow which Ben advised us it was called Watermelon Algae. It actually smells like watermelon. It is common during summer in alpine regions worldwide. The algae is caused by chlamydomonas nivalis and carotenoid pigment in addition to chlorophyll. It causes the snow to melt faster. 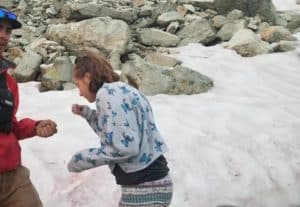 On the drive up we were able to see where the snow is manually made in the winter and where you can come ride bobsleds.We drove to the top of Blackcomb Mountain which is 7000ft. We were in a bit of a cloud at the top due to the smoke but normally you would be able to see the surrounding mountains and the village below. The sky still lit up the most beautiful pink colour. Ben gave us time to walk around the area known as Hugh’s Heaven. We were able to see the glacier on top of Blackcomb Mountain. As the sunset started to fade we headed back down the mountain. We were given the option to close the top of the jeep but was still warm enough that it wasn’t needed. You can see the entire city of Whistler Village on the decent back down which was gorgeous but my camera didn’t do it justice. Ben was able to answer every question that we had and was very knowledgeable about Whistler and surrounding areas. He was very patient with what probably seemed like the game “20 questions” from us. He gave us a ton of suggestions on places to go and excursions to try. We thoroughly enjoyed the evening. 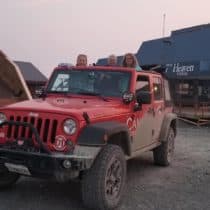 I am not the biggest fan of winter weather but listening to Ben describe some of the activities they offer it made me want to come back to try the dog sledding and the snowmobiling.