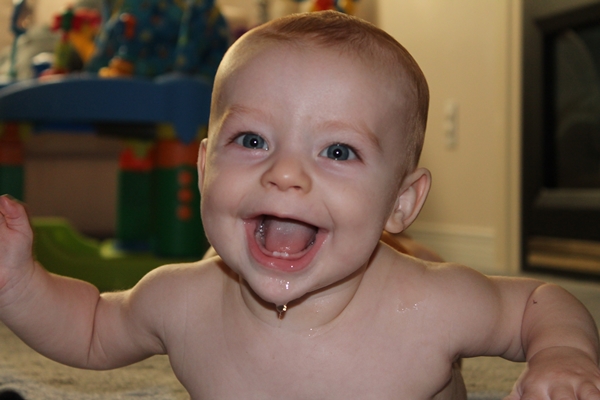 All too often as a new parent I find that I get caught up in a web of negativity. Why ISN’T my son sleeping through the night? Why WON’T he eat this unappetizing but apparently nutritious baby food? Why CAN’T my ten month old conjugate Latin verbs with his right hand while composing Elizabethan sonnets in perfect iambic pentameter with his left yet?

This year, in an attempt to improve myself and the world around me I set some goals. The hardest one to date has been: Stop complaining and find the good in everything. Sounds noble doesn’t it? I thought so too. It turns out though that some things just suck. Take mastitis for example. It feels like having the worst flu ever while being repeatedly crushed by one of those acme anvils. And while my little guy has never been much for spitting up, I fail to see how it’s good while it’s in my hair and down my shirt.

My son did however, decided to hit me again recently with another bout of teething and while I know it’s rough on our little ones, I have done my best to find some good in the parenting side of it.

So here you have it: the top 5 benefits of teething.