I was provided tickets to the advanced screening of this movie. All opinions below are my own. 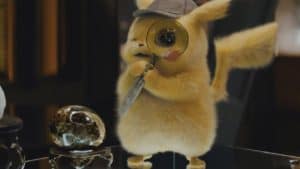 Ace detective Harry Goodman goes mysteriously missing, prompting his 21-year-old son, Tim, to find out what happened. Tim is a former Pokémon trainer in the world where humans and the various Pokémon creatures live side by side but separated by a language barrier. Aiding in the investigation is Harry’s former Pokémon partner, wise-cracking, adorable super-sleuth Detective Pikachu. Finding that they are uniquely equipped to work together, as Tim is the only human who can talk with Pikachu, they join forces to unravel the tangled mystery. The mystery includes an illicit gas, used in an underground club; and an aspiring reporter named Lucy who yearns for her big break at the news network CNM. That network is owned by Howard Clifford, the city’s billionaire mastermind, who had the dream of Pokémon and people living together in harmony.

If your child scares easily this might not be the movie for you but would recommend for ages 8 and up. There is a little bit of violence. Pokémon fight each other and humans, and there is a fatal car crash and injuries, but nothing gets bloody or graphic. The movie is rated PG. There is nothing more risqué than flirting and a couple of double-meaning jokes: when Pikachu sees a shirtless man, he quips that all he can see is “tattoos and nipples”. 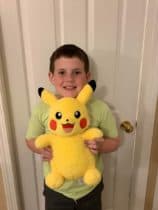 I was not familiar with the characters at all but had the idea that they would be more on the annoying side with weird sound effects but I was pleasantly surprised that they weren’t like that at all. Ethan was quite excited to see all of his favourites on the big screen and couldn’t help but tell me who each one was when he saw them. The movie had Jigglypuffs, Snorlax, Squirtles and Lourdreds. The animation was really good.

The story promotes teamwork, courage, and friendship and shows how even the seemingly inexperienced can make a difference.

If you go see the movie let me know what your favourite character was in the comments.