We were gifted tickets in exchange for this review. All opinions list below are my own. 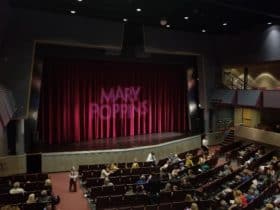 Just a reminder to families that if your small child wouldn’t be able to sit through a movie that they most likely wouldn’t be able to sit through a play. Also just like it is good etiquette and recommended to put cellphones away while sitting in a dark crowded theatre, that if possible I would avoid having children wear light-up shoes especially if they are not likely to remain seated during the show.

Mary Poppins Jr. is based on one of the most popular Disney movies of all time and the Broadway musical,  Disney and Cameron Mackintosh’s Mary Poppins is capturing hearts in a whole new way: as a practically perfect Broadway Junior musical! The jack-of-all trades, Bert (James Hurcum), introduces us to England in 1910 and the troubled Banks family. Young Jane (Natalie Sebel) and Michael (Aryana Wieland)  have sent many nannies packing before Mary Poppins (Chantal Whitlock) arrives on their doorstep. Using a combination of magic and common sense, she must teach the family members how to value each other again. Mary Poppins takes the children on many magical and memorable adventures, but Jane and Michael aren’t the only ones upon whom she has a profound effect. Even grown-ups can learn a lesson or two from the nanny who advises that “anything can happen if you let it.”

The fantastic thing about a Fraser Valley Academy of Dance production is that you really forget that you are watching young children perform. The level of professionalism and talent surpasses some adult theatre productions. There was a baby that started screaming during the show and the performers didn’t even flinch an eye and continued with their scenes. The cast all sang the classic songs beautifully but at times the music overpowered their voices and it felt like they were yelling. I am not sure if it was just the theatre itself or if adding individual microphones to main cast members would be beneficial. The honey bees, from the Primary Musical Theatre class, were real scene-stealers. I look forward to seeing which production they choose next. 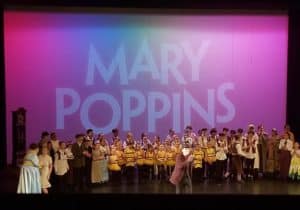 The Fraser Valley Academy of Dance opened in 2008. The Musical Theatre program is overseen by Kayla Cameron, Musical Theatre Director,  and Alexander McCune., Music Director. Kayla  has over 20 years of experience in dance and acting as a performer, teacher, choreographer and director. She was trained at the American Academy of Dramatic Arts in Los Angeles and furthered her education at the Victoria Motion Picture School, Glendale Community College,  and the British Imperial Society of Teachers of Dancing. Alexander has spent his entire life immersed in music. He preformed on CBC and toured in Germany, Whales and England. He holds a BA in Music from Trinity Western University and is choir master for the Bakerview Music Academy and has extensive experience singing, conducting and touring with several groups such as the Alberta Lyric Theatre, Grant MacEwan College Vocal Jazz Ensemble, Edmonton’s Children’s Choir and many more. Together at FVAD they have created Aladdin Jr., Beauty and the Beast Jr., Oliver and Mary Poppins Jr. For more information on joining the Musical Theatre program click here.