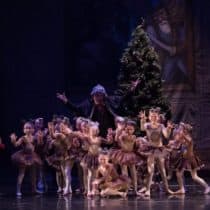 The Nutcracker is a staple in our household and has become a true winter tradition. The Fraser Valley Academy of Dance is presenting their 11th Nutcracker this season at the Clarke Theatre in Mission, BC. Artistic director, John C. Carney has been in the world of dance since 1965. Mr. Carney has trained at the Royal Ballet School, English National Ballet and the Rambert Dance School. He has been a teacher and choreographer at major international schools throughout Europe, US and Canada. He has danced many roles in the Nutcracker with the English National Ballet every winter season in London and he brings an in-depth professional knowledge of his full-length classical ballet to this local stage. Over 100 students from his Academy will perform alongside professional guest artists. 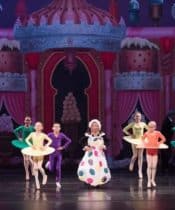 For anyone unfamiliar with the tale of the Nutcracker, it follows the Stahlbaum family on Christmas Eve. Mr. Stahlbaum and his wife and children, Clara and Fritz, welcome their guests to their annual Christmas party. Uncle Drosselmeyer, a skilled toy maker, brings all the children strange and wonderful toys. His gift to Clara was a nutcracker that her brother breaks shortly after she receives it. After the party, unable to sleep, she sneaks downstairs to check on the nutcracker which leads Clara to witness a magical battle between Soldiers and Rats. Travel along with the mysterious Drosselmeyer through Snowflakes and across the serene Ocean to the kingdom of Sweets to meet the Nutcracker Prince and the Sugar Plum Fairy. Be enchanted by the colourful and exciting dances of the Candy Canes, Flowers, Arabian, Spanish, Chinese, Smarties and Russian accompanied by Tchaikovsky’s imaginary score.

The Fraser Valley Academy of Dance has given us 4 tickets to the evening performance of The Nutcracker on December 8th. The show will take place at the Clarke Theatre in Mission, BC.