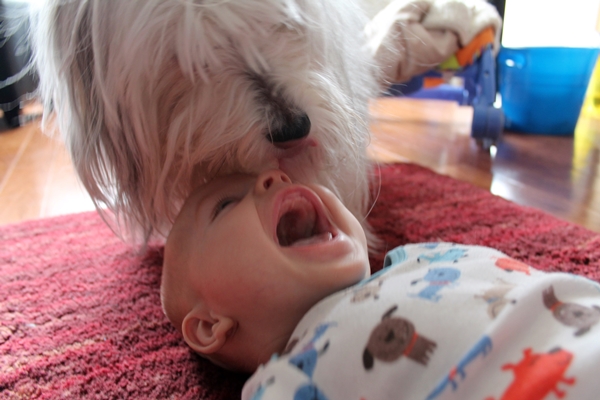 I Was a Tomboy

Growing up I was a complete and total tomboy. At any given time you could find me climbing trees, catching snakes and playing with cars and trucks in our sandbox. This was likely due to my emulating my older brother who not only convinced me at one time to jump off our second story balcony but “treated” me to a game of “open your mouth and close your eyes” that involved some farm fresh fertilizer, if you catch my drift. Frankly, I can’t remember my mother ever saying anything about my getting dirty and the only talk about germs we had was reserved for when we were sick. The five second rule reigned supreme unless of course there was something visibly sticking to whatever food item you dropped; although if it was something really good, a wipe on the jeans and a quick blow of air rendered it as good as new.

Fast-forward to the modern age of helicopter parenting and the media would have us thinking that we’re facing a germ epidemic. Hand sanitizer is the new must have mom accessory and we’re all still bracing for that swine-bird-hippopotamus flu epidemic that we all keep hearing about. If it drops to the ground you’d better boil or burn that soother because there’s no telling what form of Ebola it’s now harbouring.

In the Middle of the the Germaphobic Spectrum

Ok. Clearly I’m exaggerating…a little. I know there are moms out there all over the germaphobic spectrum and I’d like to think I’m somewhere in the middle. However, there are days that I definitely feel like I’m in the minority. Take my last trip to Costco. I had my little man happily in the cart while I was debating between a lifetime supply of crackers or croutons when I heard an audible gasp coming from behind me. I turned around to find my little man chomping away at the shopping cart while another mom looked on shielding her daughter from the horror. Turning to her husband, she spoke loudly enough for my benefit stating “I’m SO glad we have this shopping cart cover.” I gave her a shrug of my shoulders, wiped the drool from my son’s chin and moved on to the next aisle. I was so tempted to go over and tell her about how my son gets his face licked by our dog often and about the one particularly desperate time that I fed him some Cheerios that he had previously thrown on the church floor just to keep him quiet but I didn’t want to frighten her any further.

And I get it. I want to protect my son as much as the next parent. I don’t want him getting sick. It terrifies me when I think about all of the terrible illnesses that are out there that he could easily contract. We are bombarded daily with new information that is enough to make our heads spin. Even I have my limits. When his plastic keys fell to the floor of the doctor’s office where people were coughing and blowing their noses, I took them away. Of course I did let him crawl around a little and his hands inevitably ended up in his mouth so really it didn’t do any good. I defiantly told the man commenting about how dirty it was that “a few germs won’t kill him” and that it was “impossible” to keep them from him entirely.

To date my son has yet to be sick. I do believe that mild exposure to germs is a good thing. And while I’m just going on a gut mommy feeling there is science to back me up.  A study out of Boston this year has shown that mice exposed to germs are actually healthier than their germ-free counterparts. [1] So bring on the dirt, the grime and yes, the germs in small doses. Sanitize if you want to but I for one will not judge you for sticking the soother back in your baby’s mouth after it hits the floor.