This post brought to you by Kids II. The content and opinions expressed below are that of Modern Mama. You know the kind of toys that keep your kids occupied for actual amounts of real time? The ones where you can get something done, because your child does not need your help to make it work? I found them! The Kids II Oball Go Grippers Toy Collection was clearly designed for independent and creative play for little ones, as well as tons of fun! They are super durable. My 3 year old has been smashing the Oball Go Grippers Dump Truck and Loader into the baseboards for weeks now and they look exactly like they did when we opened them. My baseboards actually aren’t destroyed either! There may have also been an experiment involving a 2 and 3 year old racing the Oball Go Grippers Race Cars off the top of the stairs, because kids, and they still work as good as new. They encourage independent and cooperative play. As I mentioned above, there is nothing better than toys your kids can figure out themselves! The Oball Go Grippers Toy Collection is intuitive for little ones, they roll, pull, push, lift, open and shut easily and accurately. My son loves how he can load the Oball Go Grippers Race Cars into the Car Carrier and easily secure them in. He’s been loading and unloading for the last 20 minutes! There are lots of sharing options with the collection as well. When we had a recent play date, two children played with the Bounce ‘N Zoom Speedway while the other 2 raced the Dump Truck and Car Carrier. 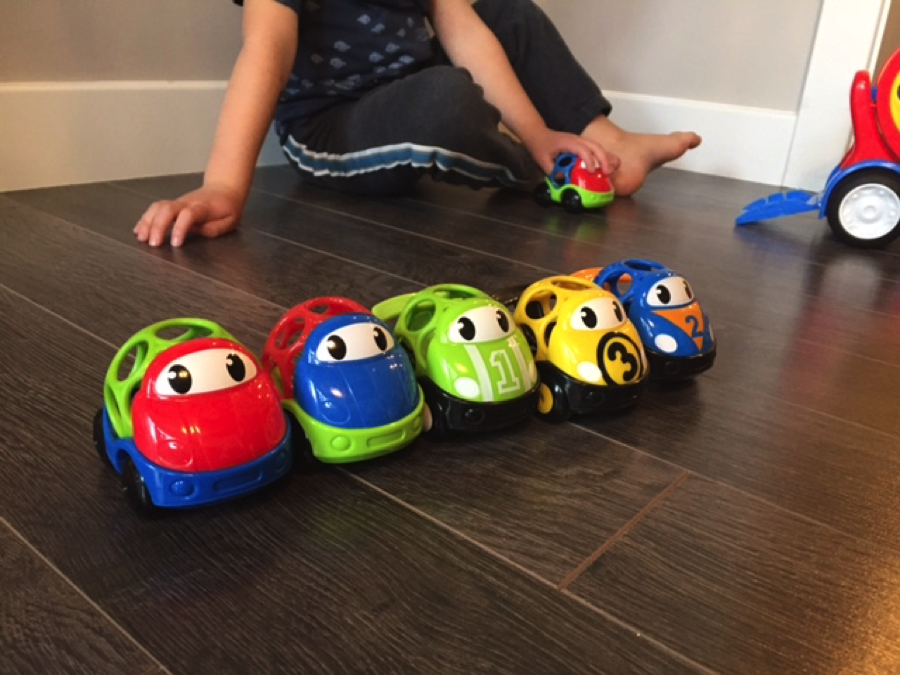 They are made for little hands. These toys have little finger holes that make for excellent gripping for kids to easily push them along, pick them up, open or close. The Go Grippers Dump Truck has a back cage that opens and closes made with the grip holes as well. My son loves to stuff all sorts of items in here and move the “load” from room to room and then dump it all out. He’s also been enjoy testing how many cars he can stack on the front of the Go Grippers Loader as well.

Lots of colour and numbers. Each of the Oball Go Grippers Race Cars has numbers or colours on them to make them distinct. This is helpful for not only encouraging number and colour recognition, but for figuring out which one is missing and likely hiding in the couch cushions! With green, red, blue, yellow and orange colours the Oball Toys Collection is lively and attractive to little ones. They also have cute and friendly eyeballs too! You can shop for Oball Go Grippers Toys at Toys R Us. shop this collection and we’re also excited to give away the entire collection to a lucky winner, perfect Christmas gift if you ask me! Please enter via Rafflecopter below. Good luck! 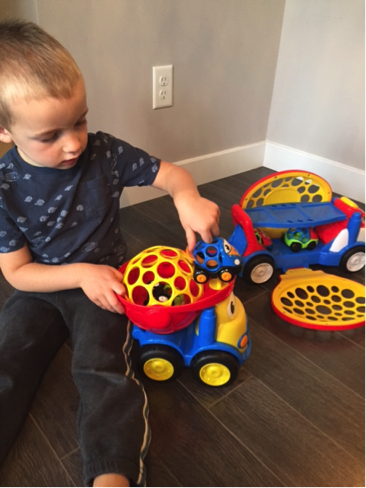