Looking for a fun outing for your 3-5 year old? I just took my almost 3-year old to a live performance of the Cat In The Hat at the Waterfront Theatre on Granville Island, and it was certainly worth crossing two bridges for!

This 45-minute show is produced by the Carousel Theatre for Young People, and my daughter loved everything about it from beginning to end. The script follows the text from the original Cat In The Hat book, and the actors, costumes, props and countless sound effects were all whimsical and fun. My daughter seemed particularly fond of tracking where the actors playing Thing 1 and Thing 2 were hiding at any given time, and I was especially impressed by the life-size “thingamagigger” that appeared on stage near the end. 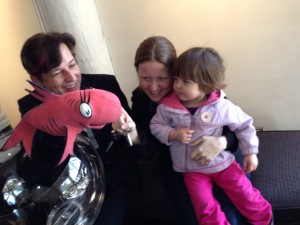 After the show, the cast took the time to answer questions from kids in the audience – most of which centered on the optical illusions created by many of the props. The highlight of the show for us was definitely the meet & greet in the lobby afterwards where the kids got to interact with all of the characters right up close. Such a treat! 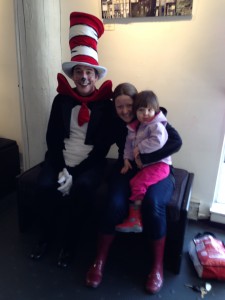 This show runs until Sunday, March 31st. Most of the showings are for 3 years +, but they do have a couple of options for “family” showings where babies are welcome (note that I do think this one would be a bit hard to sit through for a kid much younger than 3).  Tickets seem to be selling out quite quickly, but there were definitely a few left when I  checked it out last night! Get more info and tickets on the Carousel Theatre website (Adults $29, Kids $15). Enjoy the show!