I had the opportunity to attend a media preview of this event. All opinions are my own. 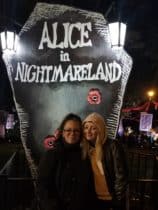 We look forward to the train in Stanley Park every year. This year’s theme is a twist on Alice in Wonderland. Alice falls down the rabbit hole again only this time she is a bit older and things are still not what they seem. 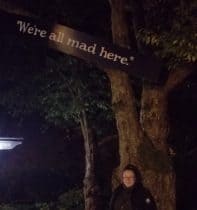 During the evenings, outside of the train there is a Pumpkin Patch, Haunted Maze and Little Monsters Maze, Creatures of the Night presented by the Stanley Park Ecology Society, Crafts, Movies and Storytelling. The Vancouver Food Bank is also collecting donations on site so if attending please keep that in mind. The actors were all quite silly and friendly and performed little skits that required crowd participation. If your child hasn’t been to Disneyland or somewhere similar where adults are in full costume interacting with them this could be a bit scary but I think with advanced warning that it would most likely be okay. The Queen of Hearts had set up a fake game of croquet with some smaller children who thought it was funny that they were the pegs for the stuffed animal that was the ball. The mazes were also very family friendly.

The train ride is about 15 minutes long. Once boarding the Mad Hatter was greeting riders but again was funny and friendly not scary. Once moving we had a bit of a jump scare with a fence of red roses that were live actors. Compared to the Bright Nights train there were a lot more live actors and sequences than I was expecting. In many parts Alice is running away from other characters and there is one big fight sequence. The music was mainly songs and there weren’t spooky sounds. We really enjoyed the train and aside from a minor jump scare didn’t find any part of it scary but it is definitely meant to be a darker experience that young children might find spooky. If you had children under 5 the matinee would most likely be an ideal time to visit depending on their level of bravery. During the matinee hours there are no live actors and ticket holders can ride the train as many times as they want.