I was provided tickets to see the exhibit. All opinions are my own. 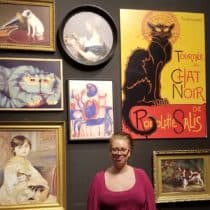 The Cats and Dogs exhibit is presented by Whitespot and created by La Cite des sciences et de l’industrie, in partnership with Le Musee de la civilization, this exhibit is the first “large scale” exhibit dedicated to these animals. It gives us all a chance to learn more about our furry friends. Cats and Dogs will run until January 5th. It is a highly educational and fully interactive. The feature gallery is included with admission, which starts at $27.15 for adults and $18.10 for children. 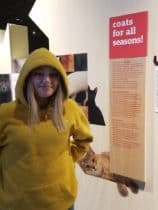 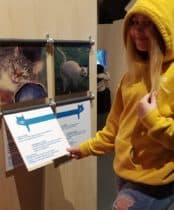 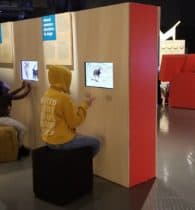 We were able to learn about the tiniest of dogs to the largest breeds and from the furriest of cats to the sleek, hairless type We had a lot of fun at the trivia stations. It was shocking how very little that we actually knew about cats and dogs. We were able to learn all about the cognitive and sensory world of these animals. The exhibit allowed us to hear, smell, and feel what its like to be one of these animals. We also really liked all the photo ops throughout the exhibit. 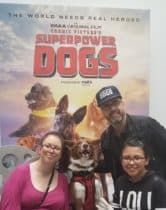 A fantastic IMAX to accompany this exhibit is Superpower Dogs film. We saw it when it first opened and we were excited to see it again. The show is 45 minutes. It follows the real-life superhero dogs that are part of the search and rescue teams all over the world. We get introduced to Henry, an avalanche rescue expert in Whistler, BC; Halo is training to be a part of one of the most elite disaster response teams in the US; Reef, a lifeguard with the Italian Coast Guard; Riccochet, a California surf legend helping special needs people; Tipper and Tony; bloodhound brothers, who are saving endangered species in Africa.