I was provided tickets for my family to attend. All opinions are my own. 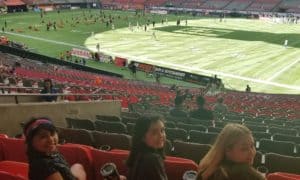 CFL Family Day is back for its 2nd year. For Family Day, each local CFL team has unique activities planned but across the league families will have a chance to: 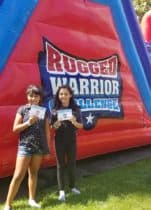 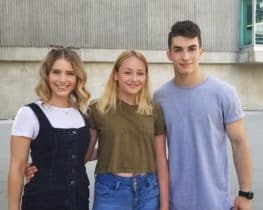 I took my daughter and nieces to the BC Lions vs Saskatchewan Roughriders game. We could not have asked for better weather. The American Ninja Warrior Jr. obstacle course was located outside the arena. Once the release form is signed for whomever is participating, they can run the course as many times as they choose. Lauren and Madison raced each other twice before tiring themselves out. After the first try each girl was given a completion certificate and a promo code to try to win tickets to the Grey Cup. Family Channel stars Alexandra Beaton (The Next Step) and Josh Bogert (Backstage) were on site to take pictures and sign autographs. They were so sweet and patient with everyone. My daughter thought it was really cool that Josh took the time to comment on our Instagram posts as well. 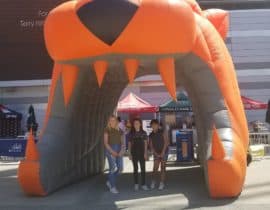 Outside of BC Place on game day they have a big inflatable lion head that is perfect for taking pictures. There are also vendors outside giving away free swag. The girls each scored mini footballs and entered to win a bunch of radio station giveaways. The Felines, BC Lions’ cheerleaders, were also taking pictures with fans.

Once inside, the first 3000 children through the doors received a new lunch kit. I really like that BC Place has many different food options that are readily available. The girls got re-fillable drinks and popcorn. I do wish that BC Place took debit, currently they are just cash and credit. At the game there were only two ATM that were in service and both had extremely long lines at all times. 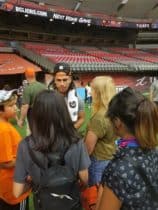 We are not big sports fans and really couldn’t tell you the rules of football so we like that there are crowd challenges, like dance-offs and kissing cam, to add extra entertainment. We had fantastic seats and both teams played great but ultimately Saskatchewan took the win. After the game, families were able to go out on the field which was such a unique experience. The field seemed harder to run on then we were expecting. We also got meet #26 Jamel Lyles and he signed a bunch of the kids lunch boxes. Highly recommend bringing a Sharpie with you to games as you never know when you might need it.