I was provided with a copy of this DVD to facilitate this review. All opinions are my own.

My daughter grew up watching this series and was excited to see the third installment. This one was a little bittersweet for her, as it is one of Cameron Boyce’s last performances. He wasn’t in the film as much as I was expecting but lights up the screen while he is. I had seen the first movie but not the second so I was a little lost on what was happening and who a few of the characters were. The music and costumes were favourite part of all these movies. They are just so catchy, bright and fun. Kenny Ortega, the choreographer, for all the Descendants films creates some of the best scenes in the movie. The Descendants series really follows the idea of nature vs nurture. Are these characters born good or evil or did their environments make them a certain way and ultimately can they be both?

I think that it would be easier to understand the struggle of certain characters if you have seen all three, but if coming in new on the third movie, the basics are that the series starts twenty years after Belle and the Beast marry, they establish the United States of Auradon, creating a new nation surrounding the kingdoms, and banish the villains to the Isle of the Lost, where magic is suspended. Their son Ben announces that his first proclamation is to give four selected children from the Isle of the Lost the chance to live in Auradon, away from the influence of their villainous parents: Carlos, son of Cruella De Ville; Jay, son of Jafar; Evie, daughter of the Evil Queen; and Mal, daughter of Maleficient. The four plot to steal the Fairy Godmother’s magic want to release the barrier so they can take over Auradon. Ben and Mal end up falling in love and all the children of the villains find happiness in Auradon and choose to be good.

The second installment follows Mal struggling to fit into the role she thinks is a  good princess that goes along with being with Prince Ben. Instead of working through her insecurities she relies on a magic spell book. When her friends and Ben get upset that she was using magic, she runs away to the Isle of the Lost, but doesn’t get a warm welcome. Other children of villains are upset that they weren’t chosen to go to Auradon. The main villain being Uma, Ursella’s daughter, who sneaks over to Auradon, with a Little Mermaid-esque plot to lure Ben away from Mal. Just like how it didn’t work out for Ursula, Uma’s plan had a similar fate which led her back to the waters near the Isle of the Lost. 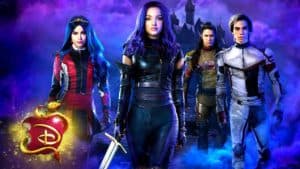 The newest movie follow’s Mal, Carlos, Jay and Evie heading to the Isle of the Lost to choose four new VK’s (villain kids) to take to Auradon. The ones chosen are Dizzy, daughter of Drizella; Celia, daughter of Dr. Facilier; and Squeaky and Squirmy, the twin sons of Mr Smee.  When the barrier from the Isle is lifted, Hades, Mal’s father, tries to escape leading to the two battling it out. Depending on your child’s age this part might seem a bit scary but ultimately good beats evil in all these movies so a bit of warning in advance should ease any fears. Ben proposes to Mal, making her future Queen of Auradon. This is a role she takes very seriously especially when the discussion of eliminating the barrier to the Isle of the Lost leaving it open or permanently leaving it closed, which would break the promise to the new VK’s of being able to visit their families again. Audrey, Ben’s ex, doesn’t take the news of the upcoming nuptials very well. Audrey steals the Queen’s Crown and Maleficent’s Sceptre and attacks Mal turning her into an old hag. She also creates a sleeping curse, turns characters into stone and wrecks havoc on all who cross her path. While creating chaos wherever she goes she also has a big musical dance number so isn’t as scary as it seems like it would be for younger viewers. In order to break the curse they need an ember from Hades and when they return to the Isle of the Lost to retrieve it they find unexpected allies in their old nemesis Uma, Gil and Harry. Uma, Hades and Mal have to work together to restore peace in Auradon. Audrey is forgiven for her wrongdoings which is ultimately what makes Ben and Mal decide to drop the barrier to the Isle of the Lost and create a bridge. Ultimately this chapter ends with a reminder that no one is just one thing: you can be both good and evil.