I have been provided season’s tickets to Gallery 7 Theatre productions. All opinions below are my own. 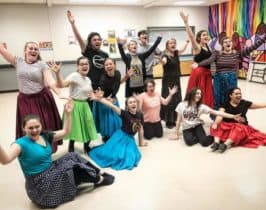 Gallery 7 Theatre is a staple in Abbotsford. This local theatre company is presenting their 100th production: Joseph and the Amazing Technicolor Dreamcoat this March. The show runs from March 22nd to 30th at the Abbotsford Arts Centre. If interested in tickets click here.

This favourite musical extravaganza follows the Biblical story of Joseph and his coat of many colors. After being sold in to slavery by his jealous brothers, Joseph gains favour with Potiphar, the Egyptian noble, before rejecting the amorous advances of Potiphar’s wife. Joseph winds up in jail where he discovers an ability to interpret dreams. His new-found talent catches the attention of the Elvis-inspired Pharaoh, and Joseph is promoted to right hand man. But during a famine, his family needs his help and Joseph is forced to decide whether to forgive or take revenge. One of the most popular shows of all time, this fun-filled, irresistible musical by master composer, Andrew Lloyd Webber, promises to be an exciting theatre experience for the entire family!

I spoke with Ken Hildebrant about the upcoming show and future plans for Gallery 7 Theatre.

Why did you choose this show for your milestone production?

Funny story. I didn’t actually realize Joseph… was going to be our 100th production until well after I had selected it! It suddenly occurred to me sometime this past fall that I’ve been saying we’ve produced over 90 productions for a couple years now, so I had better check the count. Sure enough, Joseph was number 100. LOL. We had already planned to have a musical in our line-up this year, and considering our mandate, it’s pretty amazing that everything aligned perfectly, despite my brain function loss on the production count. It’s like Someone was paying attention even if I wasn’t!

Have you run this production before and how does this one differ?

This our first ‘go’ (get it?) at Joseph and the Amazing Technicolor Dreamcoat though I have seen other productions. We’re pulling out the stops to create a spectacular theatre experience for families.

What was your first production?

Our first production was actually a series of Christmas sketches from a sketch collection called Tangled in the Tinsel by Martha Bolton, a former writer of Bob Hope. We performed the revue twice, once for a church youth banquet and later for a church event. We were founded in the Eben-Ezer Mennonite Church and they were quite supportive of what we were doing in those early years. We followed up that show with a dinner theatre experience featuring another sketch revue that explored religious themes.

What is next for Gallery 7 Theatre?

Following Joseph…we’re doing our first Shakespeare play ever: A Midsummer Night’s Dream. I thought it was time to do some Shakespeare – there’s quite an appetite for Shakespeare out there and I thought The Bard’s most popular comedy was a good fit for us. It’ll be a lot of fun, both for our team and for audiences.

Do you have any plans for holding more acting workshops?

We’re always open to the idea of holding more workshops. If schedules allow, we’ll definitely be looking in to hosting more of them. Workshops and short courses are an integral part of our mandate as a theatre but we also need to have the resources in place to offer them. I’ll be taking a look at this again for our 2019-2020 season.

I really enjoyed Beau Jest being held in a more intimate space. Are there any future plans to hold more shows in the same format?

When we were still at the Eben-Ezer church, we performed in what eventually became an intimate 140 seat arena stage. Audiences really loved the intimacy of that space and it’s always been our dream to return to that kind of theatre experience. Being in the Abbotsford Community Arts Addition for Doubt and Beau Jest these past couple of years have allowed us to go back to our roots in a sense and revive that intimate experience.
This space has worked well for us but because it’s essentially a banquet hall, there’s a lot of work for our design team and volunteers to convert it in to a performance space that suits our needs. We are hoping to move away from this space for a little bit, BUT we have big dreams moving forward.
Our dream is for a new, permanent venue in our community that will feature an intimate 200 – 250 seat thrust stage with audiences sitting around the action, much like we had for Beau Jest. As a theatre, we feel most at home in a more intimate setting that allows us to explore a wider variety of shows that don’t play as well in massive theatres.

What is your dream production you would like to present?

Haha, good question! Part of me doesn’t want to share just to keep suspense up….and I don’t want anyone to steal our ideas! LOL. There are a couple of very well-known musicals that I would love to do, and have tried to do, but couldn’t get the licensing for them. I think it would be fun to do a revival of Cotton Patch Gospel at some point…There are a number of lesser known plays that I would love to do but I’m hesitant to take the risk because they don’t do as well at the box office or they don’t quite fit our mandate. What I really wish is that people would just come to live theatre for the unique stories we share and not because they know the title – that would make my job a LOT easier when picking plays! Haha.

Thank you to Ken Hildebrandt for taking the time to talk with me. Tickets for Joseph and the Amazing Technicolor Dreamcoat and A Midsummer Night’s Dream are currently on sale now. If interested visit the Gallery 7 Theatre site.