I was provided tickets to the show in order to facilitate this review. All opinions are my own. 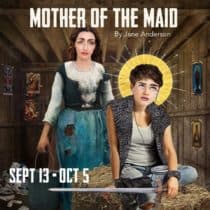 This was our first visit to the Pacific Theatre and I really liked how the theatre was set up. There was rows of seats going up from the stage on each side. It was set up in a non-traditional way that I haven’t seen before. The floor of the stage was a beautiful floral mural. The play has an 8pm start and a running time of 2 hours with a 15 minute intermission. The story itself could be all ages but the show does have some minor violence and a bit of the language used would be better suited to ages 10 and up. The show ends its run on October 5th.

The play is another re-telling of the timeless tale of Joan of Arc. She was a peasant girl who claimed to hear messages from Saint Catherine. She was chosen by God to lead a French army against the English and was burned at the stake for heresy. This story has been told countless times in books, movies, plays and more. Mother of the Maid tells Joan’s story through her mother’s, Isabelle, point-of-view. The sets and costumes were very simple but the performances were so complex that I appreciated not having the background as a distraction.

As a mother of an almost teen, I could relate to Isablle’s struggle with raising a willful child. We can tell our children countless times to do something or try to guide them on how to act but in the end they will choose their own path. Isabelle loves her daughter regardless of the path she chooses but still wants to protect her daughter from pain and suffering. Isabelle pictured a life of discipline, a loving husband and not one filled with conversations with God for her daughter. She struggles to share her daughter with the world. She does a fantastic job of portraying a realistic and layered portrait of how humorous and heart-breaking being a parent can be. The story also has strong supporting role’s with Joan’s father and brother but the heart of the story really is Isabelle and Joan’s relationship.