I was provided tickets to the advanced screening to facilitate this review. All opinions listed below are my own. 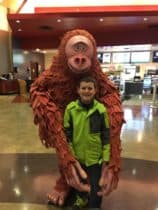 Missing Link is in theatres starting April 12th, 2019. We were big fans of Laika’s film, Coraline a couple of years ago. Besides the look of the films, they are very different! Missing Link follows the life of the last known sasquatch, Mr. Link. This globetrotting comedy tips its hat to frontier Westerns, Victorian literature, and 1930’s creation. Sir Lionel Frost considers himself to be the world’s foremost investigator of myths and monsters. The trouble is, no one else seems to agree. He sees a chance to prove to himself by travelling to America’s Pacific Northwest to discover the world’s most legendary creature, the Missing Link. Mr. Link is slightly silly, surprisingly smart and soulful beast who Sir Lionel discovers. As species go, he’s as endangered as they get; he’s possibly the last of his kind, he’s lonely, and he believes that Sir Lionel is the one man alive who can help him. Together they set out on a daring quest around the world to seek out Link’s distant relatives in the fabled valley of Shangri-La. Along with the independent and resourceful Adelina Fortnight, who possesses the only known map to the group’s secret destination, the unlikely trio embarks on a riotous rollercoaster ride of a journey. Along the way, our fearless explorers encounter more than their fair share of peril, stalked at every turn by dastardly villains seeking to thwart their mission. Through it all, Mr. Link’s disarming charm and good-humored conviction provided the emotional and comedic foundation of this fun-filled family comedy.

Our favourite character to watch was Mr. Link. He just wanted to find creatures that looked like him and feel like he belonged. His journey was to find his distant cousins, the yeti’s that live in the Himalayas. There are a few scenes with the yeti’s that might be scary for younger viewers. I would recommend this movie for ages 8 and up. I think this movie proves as a great reminder that family comes in all shapes and sizes. It can be sad to not be accepted for who you are but the happily ever after can sometimes be better than we try to plan.

FUN FACT: All of the characters were 3D printed. That means for every word each character says they need a completely different face.