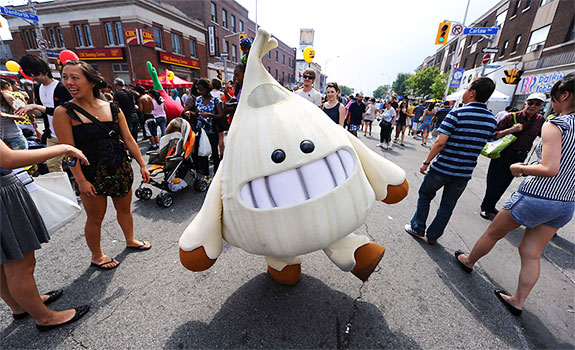 We are in the last half of summer so it’s time to make the most of these final weeks with the family. Whether that involves a destination vacation or stay-cation, one thing is for certain, it will involve sunshine, happy times and great memories. See you out in the city!

A Toronto favorite! Greektown Taste of the Danforth showcases the best of Hellenic food, culture, and music – from souvlaki to mezes, authentic Greek music, to interactive children’s games!

Kids – join this high-tech tour designed just for you and your family! Learn about the labs  at OCAD (Ontario College of Art and Design), how the Great Fire of 1904 was started by a necktie, and much more. You’ll be using tablet computers on the go provided by the Textile Museum of Canada on this tour in and around Toronto’s Fashion District.

Caribbean Carnival August 11th, 2013 Closing ceremony at the St. James Cathedral in downtown Toronto.
Caribbean Carnival Toronto is an exciting three-week cultural explosion of Caribbean music, cuisine, revelry as well as visual and performing arts. In its 46th year it has become a major international event and the largest cultural festival of its kind in North America. As Carnival is an international cultural phenomenon, the great metropolis of Toronto and its environs will come alive as the city explodes with the pulsating rhythms and melodies of Calypso, Soca, Reggae, Hip Hop, Chutney, Steel Pan and Brass Bands. This colourful exhibition and display of genius is truly a musical panorama that is certain to bring a pleasing smile to the ancestral titans of Pan and Calypso music

An afternoon-long celebration of Pan-Asian cuisine and arts, the Fortune Cooking Festival at the Harbourfront Centre showcases the diverse array of trends and tastes that comprise the Asian continent. Visitors can indulge in dishes from some of Toronto’s top Pan-Asian restaurants, reflecting a wide variety of culinary traditions and cultures. The Festival also offers performances and presentations celebrating Pan-Asian culture, including its own Iron Chef Competition featuring  local chefs.

Toronto Midtown Moms Picnic August 10, 2013 12:00 noon.
June Rowlands Park @ Mount Pleasant/Davisville. An impromptu potluck picnic where babies, toddlers and their parents can enjoy the company of their neighbors. Everyone is encouraged to bring a dish to share, plates & cutlery, drinks, a container for leftovers and a comfy blanket to sit on. This park features a nice playground and newly installed splash pad.