The quintessential Seuss! Dr. Seuss’ The Cat in the Hat returns to the Carousel Theatre for Young People stage.

An extraordinary treat for the senses, the Cat and his hat leap off the pages of the beloved and classic Dr. Suess picture book with physical theatre, magic and movement that will delight young audiences and inspire a lifelong love and curiosity for theatre.

On Saturday March 4 at 2pm, Carousel Theatre for Young People will present its second Relaxed Performance specially crafted for children with autism, sensory and communication disorders, and people who benefit from a more relaxed theatre environment.

The Cat’s chaos unfolds under the direction of Carole Higgins and features the return of cast members from CTYP’s critically-acclaimed 2013 production, including Mike Stack in the title role with Mack Gordon, Nicol Spinola and Amanda Testini. Lauren Jackson and Kayvon Khoshkam join the cast as Sally and Fish. 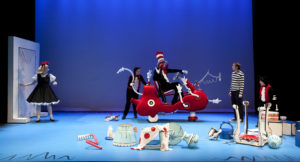 Details on the Play

Dr. Seuss’ The Cat in the Hat

The Waterfront Theatre on Granville Island, located at 1412 Cartwright St, Vancouver BC 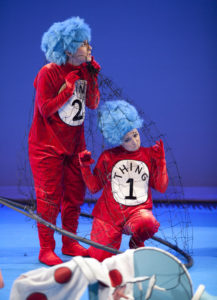 One lucky reader will get 4 tickets to the show by entering below. The show will be taking place between March 14 – 17th (showtime to be confirmed once the winner is selected based on availability).

*All images provided by Carousel Theatre for Young People

Founded in 1976, Carousel Theatre for Young People provides playful, exceptional and accessible theatrical experiences that inspire, involve and educate. Each season approximately 40 000 young people and their families benefit from CTYP’s programming. At Carousel Theatre for Young People we believe that the arts play a vital role in a young person’s development.  We envision a community that empowers people to be more imaginative, expressive and engaged.