I was provided tickets to facilitate this review. All opinions are my own 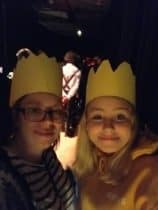 The experience starts with a royal coronation to greet the young king prior to the production. The theatre goers were separated in to groups of 8 to 10 people. Each group were given a card to indicate which land they had travelled from. We were the Industrious Denizen of the South. We were introduced to one of the kings staff who was very concerned that we didn’t bring an actual gift and just had the cards with us. In the second space we entered we were able to look at suitcases filled with gifts from others for the king. In the third space that we were in we were able to create crowns to wear. We weren’t sure exactly how long we had to decorate so we went for a very basic design. We were impressed at how inventive some families were. There were crowns decorated with different shapes at the top and others that looked like a homemade snowflakes. During the crown making session a few of the children were provided with actual gifts to present the king. Smaller children could sit on the floor near the front of the stage. The show was very interactive. Three of the children that were given gifts got up and presented them directly to the king. The last became the kings helper and his present made its way around the room in a musical pass the potato type game. 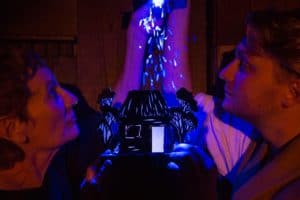 This two person play used traditional monologues but also a series of shadow puppets and different light tricks to tell the tale of a young goatherd, who finds out that he is heir to the throne and is dazzled by the riches and finery of his new life, only to discover that everything comes at a The classic Oscar Wilde story, The Young King, is a coming of age story that grapples with the ethics of beauty, leadership and compassion. The beautiful language of Oscar Wilde joins the intimate and magical world of internationally-acclaimed theatre company Slingsby (Adelaide, Australia), as audiences journey to faraway lands replete with rich rewards and challenging choices.

The Young King is recommended for ages 8 and up.