I was not provided tickets to facilitate this review. All opinions are my own. 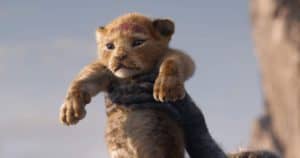 This live action remake of the Disney classic tells the tale of the future lion king, Simba. King Mufasa’s brother, Scar, desperately wants to be king. Scar plots to kill his brother and nephew by luring Simba into a wildebeest stampede. Simba survives but runs away based off of Scar’s recommendations. Simba meets two new friends, Timon and Pumbaa, who helps him life a care-free life under the motto “hakuna matata”, which means “no worries” in Swahili. As a young adult, he is reunited with his former best friend Nala, who urges him to return to his home to end Scar’s reign.  Still feeling guilty over his father’s death, Simba refuses. He encounters Rafiki, a wise mandrill who serves as shaman, reminds him that Mufasa’s spirit lives on inside of him. Simba is visited by the ghost of Mufasa in the night sky, who tells him that he must take his rightful place as king. Realizing that he can no longer run from his past, Simba decides to return to the Pride Lands to take his rightful place as King. 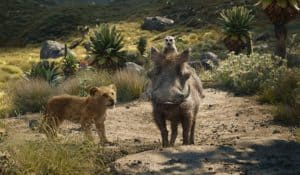 The live action tale tells the exact story of the original which I appreciated. For younger audiences I would ensure to have the talk about the circle of life before going to this one as the death brought my 12-year-old to tears.

The graphics are so spectacular, that at times it appears that you are watching actual animals not their CGI counterparts. The talking animals aside, the movie feels like you are watching  a nature documentary. The realism could make scenes with Scar or the hyenas a bit scarier for younger viewers. Animals in the wild do eat and attack each other. There are scenes where you see animals bite each other but the camera pans away before it gets more graphic.

Beyoncé and Donald Glover, adult Nala and Simba, share one classic duet together but I would have liked to see them sing an original song. With two such amazing artists, their singing voices were under utilized. Seth Rogan and Billy Eichner did a great job with their improv of Timon and Pumbaa. I hope they include outtakes in the dvd or on youtube.