I was provided with tickets in exchange for reviewing this production. 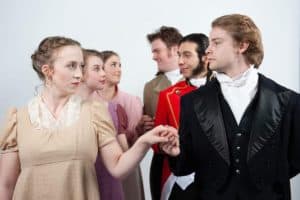 This Jane Austen classic, Pride and Prejudice, tells the story of the Bennet’s. With her daughters reaching marriageable age and the family finances running dangerously thin, Mrs. Bennet endeavours to find the perfect match for each of her girls but her plans are stymied when Elizabeth, upon hearing not-so-kind comments from the surly and morose Mr. Darcy, develops a hostility towards the man. Can the two overcome their personal pride and the prejudice they feel towards each other and discover true love?

Pride and Prejudice marks the 98th performance put on by Gallery 7 Theatre, located in Abbotsford. The production runs approximately three hours long with a twenty minute intermission and it felt a bit long. I was not very familiar with the story prior to attending the show other than it was a classic. The production was funnier than I was expecting. Mrs. Bennet was a hilarious, overbearing, mother to five daughters. The relationship between the sisters reminded me of Louisa May Alcott’s Little Women. The tale is ultimately a will they/won’t they romance between several characters in this story but it also focuses on women’s value in society, social expectations and family. The story is so timeless that it was still very relevant today. The costumes and backdrops were a bit plain but the performances were so big that I almost appreciated that they were able to stand on their own without a distraction of the surroundings. I attended the show on opening night and the theatre was packed. I had never seen the Abbotsford Arts Centre parking lot so full. I highly recommend if attending the show to arrive early enough to find parking and to remember to be patient while leaving.

Want to know which Bennet sister you are? Take the quiz here. 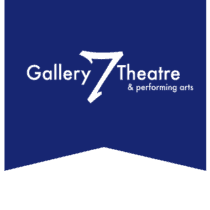