I was provided tickets to the show to facilitate this review. 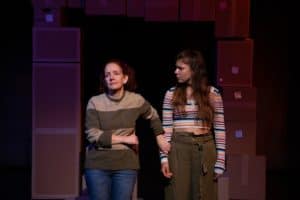 Zee Zee Theatre presents Dead People’s Things which is based on the true story of  Phyllis, a millennial, inherits a house and all of its contents after her estranged hoarder aunt commits suicide. She then must work with the neighbour, Beatrice, a Baby Boomer, who has been named executrix, to try to make some sense of the life and death of a woman she barely knew, through the things she left behind.

This play was both hilarious and heart-breaking. Both women regardless of age have to process their feelings of grief. Phyllis comes at the situation from a place of seeing one too many Netflix crime dramas and wanting to solve the case of why she was left with all of her aunts belongings, as if knowing the why will make her death okay and somehow make the pain of the aunt being gone go away. Beatrice feels traumatized and guilty from not being able to do more to save her neighbour. She seems to think if she had reached out more or revealed different thoughts she was having that it could have changed the overall outcome, when really the what ifs can’t solve anything but make Beatrice feel bad about the multiple scenarios that can never happen. Guilt can be a real mind-fucker. We use guilt to make things say or mean something or can warp a situation into something it never was. Part of Phyllis and Beatrice’s communication challenges are that they both present their grief very differently. I think that is an important piece of this story because we all show emotions in different ways that need to be valued and not challenged if they don’t appear the same. It was really beautiful and brave that both women allowed each other the space to feel all the feels. They were angry, sad, shocked, grief-stricken and vulnerable.

My own mother passed away almost a decade ago so I really could relate to the struggles that these characters were going through. Sorting through your love ones belongs can be a  very complex thing. It can feel like an invasion of privacy and an extremely unwanted chore, until you are at the last box you realize that the last piece of what is left is done. The last box can make you wish you were on the first all over again. You never really know if you are making the right choice with the things you keep or donate. The ladies were fortunate enough that they had a will and semi-system of sticky notes to execute. At the end stuff is just stuff but for the sentimental stuff can also tell the story of the life that was “you”.

Beatrice and Phyllis are both left with things that they wished they could said or did differently. We are only given today and we need to lead with love and make the days count and forgive the ones that don’t. If you or someone you know are struggling with thoughts of suicide please know that there is help available: Canadian Association for Suicide Prevention.