We were gifted passes to attend the aquarium. All opinions are my own.

This otter was so cute. It was almost as if he realized I was trying to get his picture and he would stop right in front of me.

Last week was Otter Awareness Week at the Vancouver Aquarium. We went to visit Tanu, Katmai, Mak, Kunik, Rialto and Hardy. There is also a new addition Tazlina, who is fresh out of Alaska. Just like all the other otters at the aquarium, Taz, is a rescue otter discovered by fisherman in April as an abandoned newborn. We didn’t catch him but the aquarium’s mascot Ollie was on-site as well.

The sea otters at the Vancouver Aquarium were all rescued as babies. The staff had to bottle-feed and groom them until they learned how to do that for themselves. Grooming is very important for otters. It is critical that they keep their fur clean to maintain the insulating air layer between the water and their skin. Adults spend up to 30% or more of their day grooming themselves by licking and blowing into it. 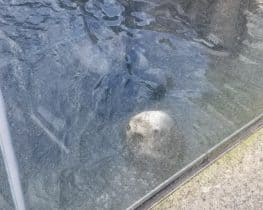 BC’s sea otters are descendants of 89 Alaskan sea otters that were relocated by government biologists to the West Coast of Vancouver Island between 1969 and 1972. The population is now estimated at 6,000. The Canadian Fisheries Act and the BC Wildlife Act protect the BC sea otter population as a “threatened” species. 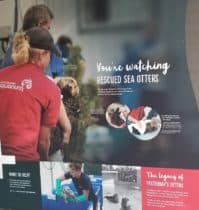 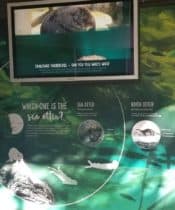 Guests can have a Sea Otter behind-the-scenes encounter experience with an aquarium interpreter to learn more about these playful animals and get a hands-on training session with the marine mammal training team. During the experience, guests will spend time in the Animal Encounter room, learning why the otters are so important to their ecosystem. After they will meet with a member of the marine mammal staff to learn about animal care and feeding. Before it ends, guests get a chance to get closer to the animals as you help with an otter training session. The experience lasts 45 minutes and participants must be 8 years or older. For one adult and one child it is $52.

Attendees can symbolically adopt one of the sea otters by purchasing an Aquadopt Kit. All proceeds go to looking after the sea otters and the conservation mission.