I was provided passes to the advanced screening of this movie. All opinions below are my own.

From Disney and visionary director Tim Burton, the all-new grand live-action adventure “Dumbo” expands on the beloved classic story where differences are celebrated, family is cherished and dreams take flight. Circus owner Max Medici (Danny DeVito) enlists former star and recent widower Holt Farrier (Colin Farrell) and his children Milly (Nico Parker) and Joe (Finley Hobbins) to care for a newborn elephant whose oversized ears make him a laughingstock in an already struggling circus. But when they discover that Dumbo can fly, the circus makes an incredible comeback, attracting persuasive entrepreneur V.A. Vandevere (Michael Keaton), who recruits the peculiar pachyderm for his newest, larger-than-life entertainment venture, Dreamland. Dumbo soars to new heights alongside a charming and spectacular aerial artist, Colette Marchant (Eva Green), until Holt learns that beneath its shiny veneer, Dreamland is full of dark secrets.

FUN FACT: The actress who plays Milly, Nico Parker, is the daughter of actress Thandie Newton.

SOME MINOR SPOILERS AHEAD 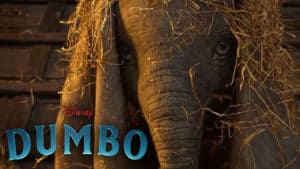 This is a definitely a darker re-telling of the classic tale. The graphics in this version make Dumbo and the other elephants look so real and his bright blue eyes make you not want to take your eyes off of him. The story starts off with Mrs. Jumbo being fiercely protective of her newborn and doesn’t take the teasing and borderline animal abuse from a certain circus staff member lightly. During the show the circus hand causes her to lash out wrecking havoc during the show, not only causing his demise but the bad press forces circus owner Max to sell her back to the person he bought her from. My 11-year-old daughter cried for the first 15 minutes of the movie. Miss Atlantis sings a hauntingly beautiful rendition of Baby Mine. Highly recommend bringing Kleenex. Milly and Joe, having recently lost their mother, bond with Dumbo over his pain of losing his mother. The children help Dumbo realize he has the special ability to fly. They make a deal with Dumbo that if he makes the circus money and participates in the show that he would be able to be reunited with his mother. A promise that you wonder if it might be a promise that they are not able to keep. Dumbo is painted as a clown during the show which is a much more depressing and sad look then the cute cartoon image. There are certain scenes while Dumbo is a clown/firefighter that involve flames that could be scary for small children that could be unsure if Dumbo gets hurt. There is also fun scenes with Dumbo flying around the room and splashing audience members, that try to make fun of him, with water. The original Disney cartoon had scenes of Dumbo accidentally drinking champagne but the updated version does not. The show-stopping headlines catch the attention of fellow showman V.A. Vandevere who hires Dumbo and the entire circus act to come live and work at his attraction, Dreamland. I thought Dreamland would make a fantastic attraction at one of the Disney parks as well. At Dreamland, Dumbo and the rest of the circus troupe are faced with new challenges and adventures. Dreamland stood as a reminder that sometimes if things seem too good to be true, then it probably is. At Dreamland there are a few scenes where Dumbo is standing on top of a high pillar and there is some risk that he could fall or the potentially hurt the aerial artist Colette that could appear scary for young viewers. Nightmare Island holds the World’s Most Dangerous Animals that are briefly shown but have no real interaction with Dumbo. Tim Burton did a fantastic job of creating a family of outcasts. No matter what challenge the Medici Brothers Travelling Circus faced they did it together.