We were gifted a game from Vancouver Mysteries. All opinions are my own. 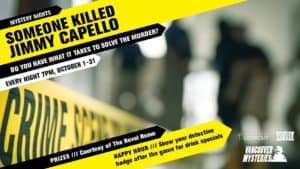 My daughter and I had never tried a scavenger hunt before but always thought that Vancouver Mysteries seemed like a fun idea. We jumped at the opportunity to play amateur detectives and help solve the murder of Jimmy Capello. The games are rain or shine but we got very lucky and had a dry night. Our game started at the Vancouver Lookout at 7pm. The public bathroom in the building does close at 6pm and staff couldn’t direct us to somewhere close by that had a bathroom so definitely keep that in mind so that you don’t load up on big drinks prior or during. Before starting the game we were given a map to show where we would find our clues, a sheet to document our answers, a clue book, an evidence bag filled with clues and a detective bag filled with additional needed items such as a magnifying glass, flashlight and measuring tape. We were playing against three other teams and had two hours to finish.

Our game was set in Gastown. Our first clue led us to Waterfront station, which also FYI does not have public washrooms, where we had to find a matching shape that linked a character in the clue book to a pattern found inside the building. The next clues had us investigate a statue, historical building and a local park. At each clue stop, our book also gave us a fact about the thing or area. It was way more educational than I was expecting and a great way to teach my daughter about some of the history within Gastown. The clues were relatively easy but we totally were over-thinking it which ultimately was our downfall. We were super slow and managed to figure out the who but didn’t quite get to the how or why. We did appreciate that the game leader filled in the blanks for us at the end so that we weren’t left wondering. I think that the scavenger hunt would make for a great date night idea or something fun to do as a group. This game can be played by teams of 2 to 5 people. Even though we were not great detectives, we did have a lot of fun and appreciated the new experience.

Vancouver Mysteries has two other games: Secret Mission and Heroes and Villains. The games are similar to an escape room except the same is outside and covers 2km. The games are $32 per player for teams of 2-40 players and $28 per player for teams of 41-120 players. Secret Mission allows you to be secret agents who’s assignment is to save Vancouver from a dangerous organization plotting to destroy the city. You will follow the clues to bring their leaders to justice. Heroes and Villains is their most family-friendly game. Players are turned into scientists who are trying to stop the Muck Monster. Your goal for this game is to find her secret hideout, discover her secret identity and to stop her attack. The games are dog friendly too.